You might remember seeing my post about the Wind Reaper a few weeks ago, an evil version of the Man-O-War that popped up on ebay. Well, another vehicle posted up there around the same time. Named for it’s multi-launcher feature, the Gatling is another awesome prototype of the Air Raiders line that never saw the light of day. 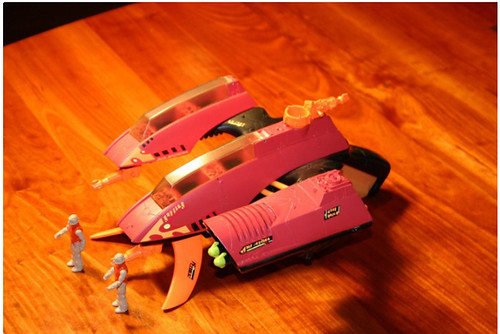 I assume we saw the first stages of this design from another series of sketches that appeared on ebay. There were a bunch of air-powered ideas like an ejection seat, depth charges and a gatling gun-like missile launcher (lower left). Obviously the designer was brainstorming and trying to come up with some interesting features. I wonder if any of these ideas were applied to a vehicle we haven’t seen yet.

The Gatling is, based on the the colors and choice of pilots, a rebel vehicle that probably landed in the Twin Lightning price point area. It’s heavily armed with two cannons mounted forward and a manned rear blaster too. 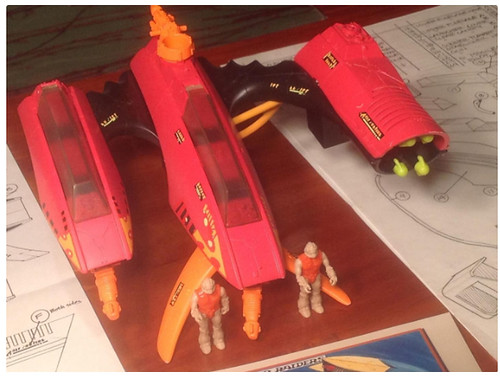 In addition, it had a four or five shot gatling missile launcher. The launcher seems to have been activated by a pump shaped like a pistol grip in the back. Well, that’s definitely a different way to do it from the other hand pump vehicles like the Twin Lightning and Hawkwind. There’s a lot of nice detail work on the underside too. 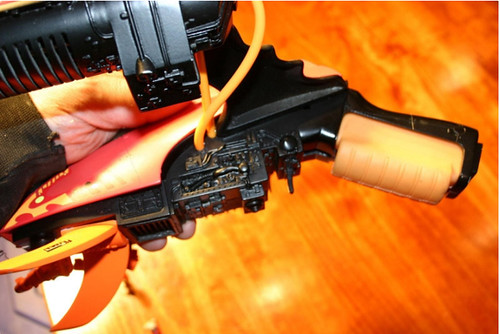 The Gatling has a similar look to the Twin Lightning with it’s double cockpits though I’m not sure if there are two or four seats available for crew under those canopies. There’s also a really neat forward landing gear comprised of two large curved blades. The pistol grip doubles up as the rear landing gear.

One thing I find interesting is the difference with the size of the “wings” as the one that mounts the gatling missile launcher is longer then the other one. It gives a lopsided appearance to the aircraft and I wonder what the thought was behind it. If anything, I would have switched them to shorten the distance the air had to travel from the pump handle.

Sadly, there were no special figures created for this vehicle at the time. I imagine if it had gone into production that they would have made a pilot figure similar to what they did for the other pricier vehicles. 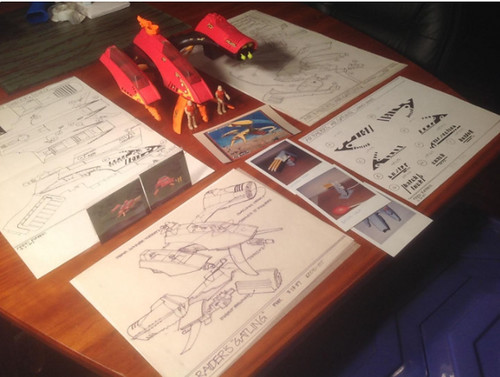 Air Raiders was an action vehicle and figure line created by Hasbro in the mid to late 80s. The figures were just two inches tall and articulated at the shoulders and hips. The size and articulation of the figures gave designers at Hasbro a huge opportunity to create really cool vehicles and play-sets which they did!
The line was unique in that everything was powered by air. Bellows, tubes and valves made this really fun for boys to assemble and activate. Air Raiders and their nemesis, Tyrants of the Wind lasted three years before being cancelled. So the line is now hugely collectable!
What is being offered here is a one of a kind collection of a third year idea called the Air Gatling. This toy never made it to market, making this collection extremely rare, if not the only one in existence. The collection includes a cast, painted and decorated Toy Fair prototype with two figures and multiple missiles; some original pencil technical drawings created at the genesis of the toy; 3 Polaroid snapshots of working prototypes leading up to the final design; two 2 x 3 Kodachrome transparencies taken for sales and marketing catalogs, and a photo of the presentation rendering..
This collection is being offered as a complete package with the intent of keeping the items together.

A few things of note:

6 thoughts on “[Multiple] Barrels of Fun!”