Hey folks, here’s an interesting set of pictures for you! I came across a fansite called botriot that was dedicated to several robot toy lines in the ’80s. While much of it was left unfinished, they did post some cool catalog pictures of transformers. And what really made me sit up and take a closer look was this page: 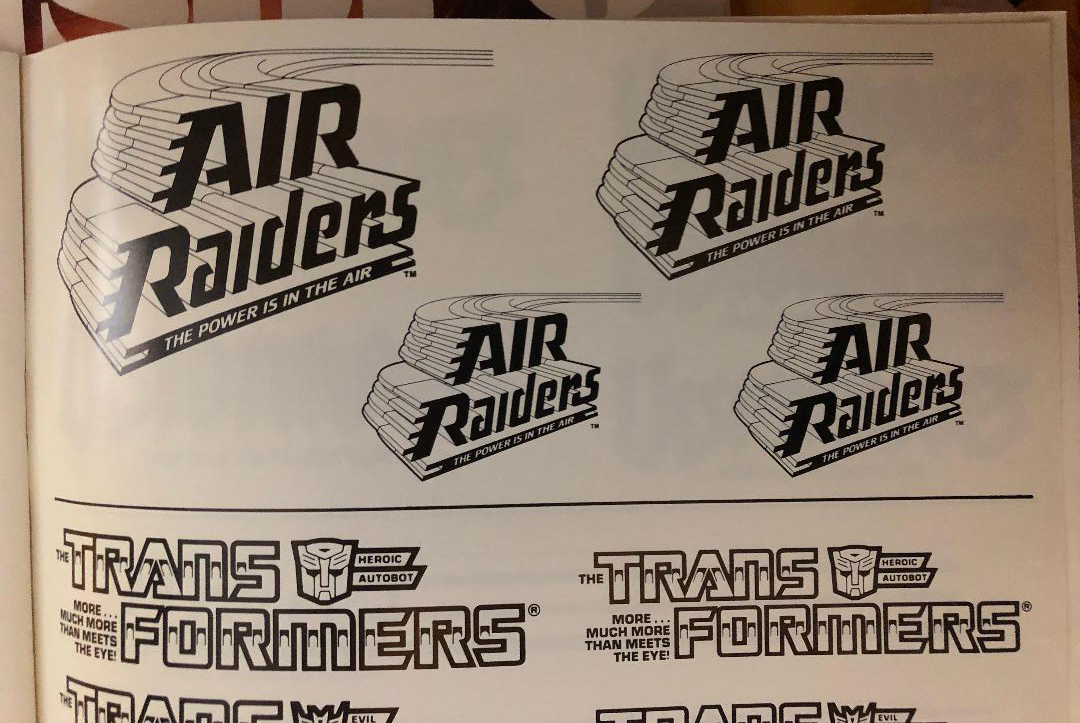 The catalog was labeled as “Hasbro 1988 Pre-Toy Fair Line Art” so I knew this wasn’t related to the original release, this was the second series of toys. I started looking through the pictures they posted, hoping for some great pictures but they were limited to just the Transformers product. The other problem was that the site had no contact info and hadn’t been updated in a while.

After doing some digging, I managed to track down the owners through another fan site about Jem and they very kindly shared some photos they took of the Air Raiders pages. 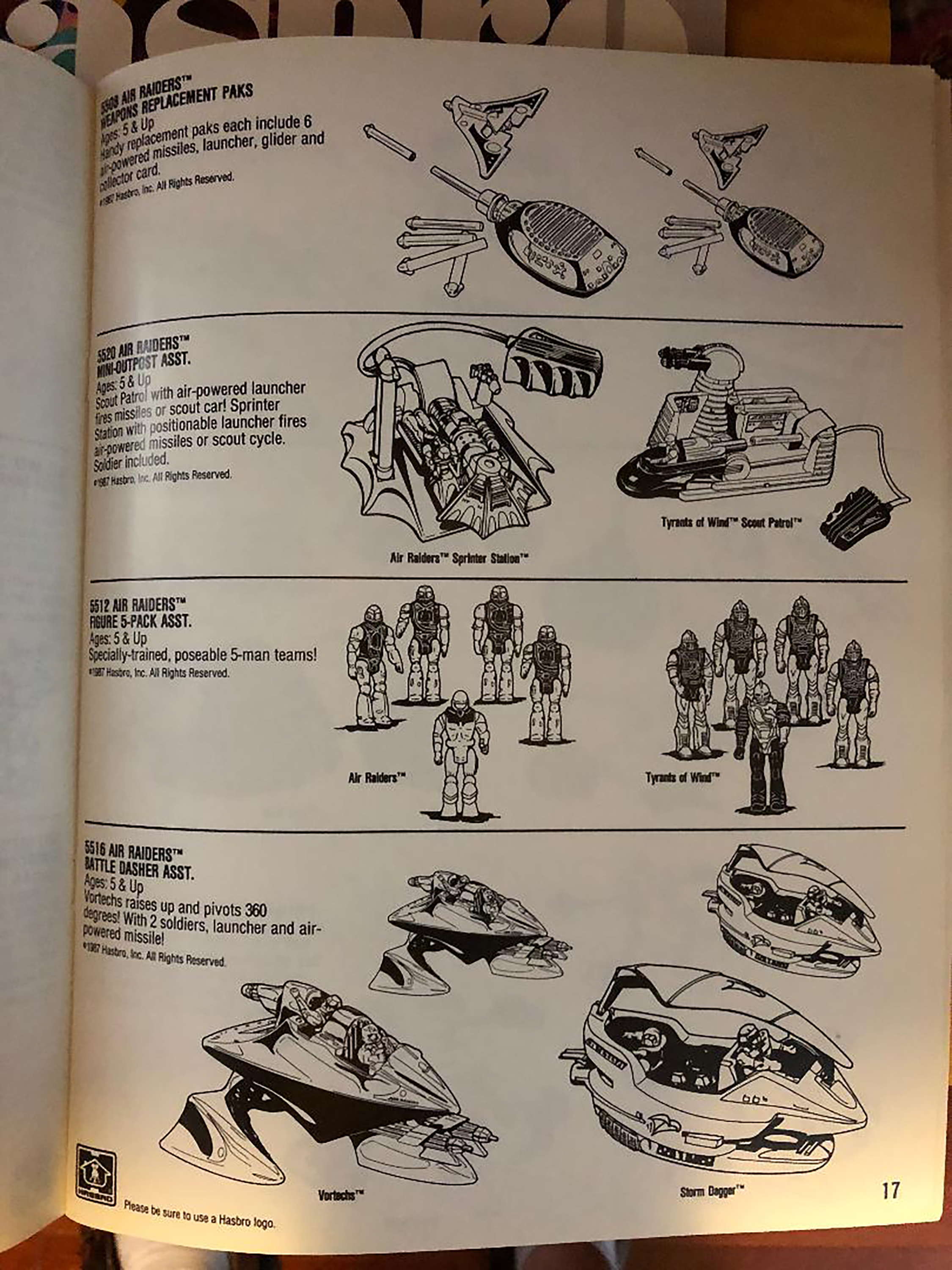 One thing I was disappointed by is the Transformers pages showed before and after shots of the transformation process. I was hoping this would carry on with a quick visual of how the Air Raiders toys worked because I still don’t know how the Vortechs is supposed to spin around or what exactly the Air Punch does. In addition, many of the picture angles are similar to catalog pages we’ve seen already. We also didn’t get drawings of all the toys which makes me wonder if they already knew what was coming.

One thing I found interesting is that there was only one 5-figure group for the good guys and one for the bad guys. So I wonder if all those figure squads we see in the catalog would’ve been pared down to just four unique figures total. 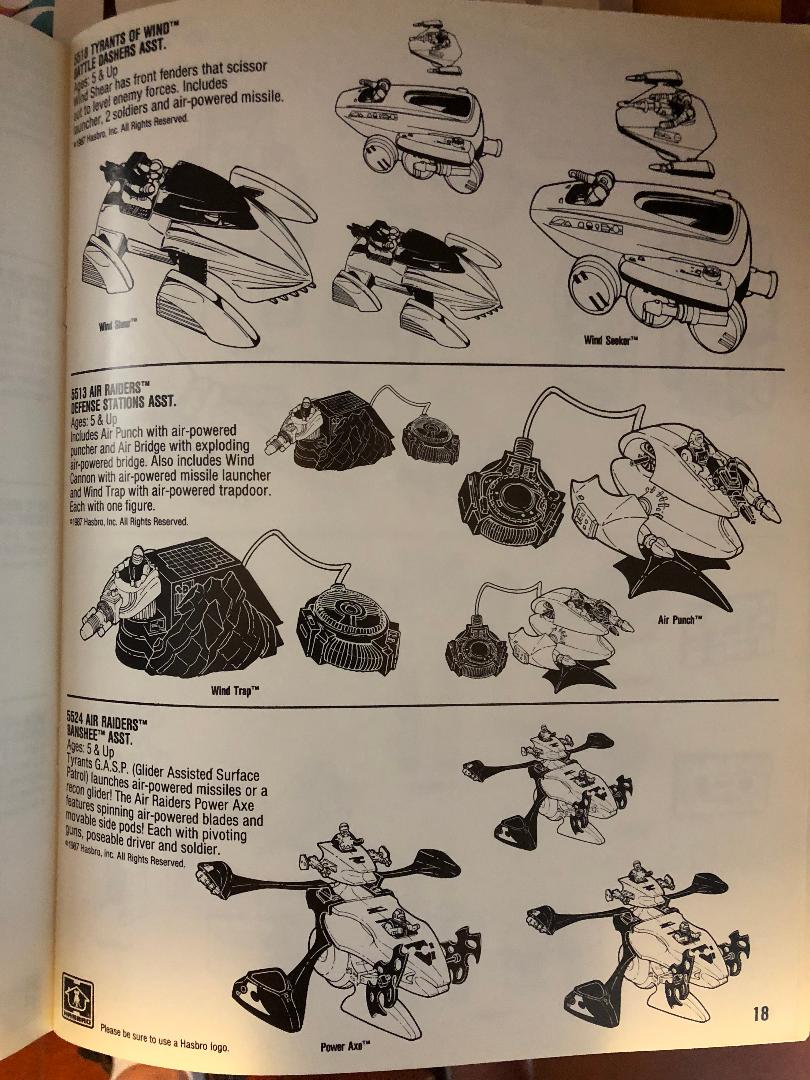 And here’s page 2! No G.A.S.P. sadly but you can see the bellows pump for the Power Axe so now I know how that worked. I’m not sure why they showed the same drawing of the Power Axe three times though.

These pages were also an interesting confirmation that there were no big splashy vehicles at this point. The Power Axe and G.A.S.P. were probably the same size and cost as the Hawkwind and Twin Lightning. So no Thunderhammer, Dragonwind, Command Outpost or Man-O-War equivalents. Maybe they were cutting back on the big stuff to save on overall costs? Or maybe stuff like the Gatling were still not ready?