Fred Rieber was a designer for Hasbro starting back in the ’80s. He was one of the primary product designers that worked on Air Raiders along with Dan Price and he was kind enough to answer some questions on his work.

Airlandia: What were your responsibilities?

I did a lot of the air-activated concepts, missiles were a natural and were part of the line from Steve Reiss’ inception. Steve Reiss named them the Air Masters and they were later changed to Air Raiders. The hammer actions, exploding rocks, trap doors, with the modular tubing and remote activations were my domain. I also did design styling, lots of sketches and rendering, even helped Ron Rudat [with character development and illustration for the sculptors.

Airlandia: Each vehicle seems to have had a primary artist who was responsible for its design and function. I’ve seen some amazing art of yours for the Twin Lightning and Command Outpost. Were those your creations? Did you design any of the other vehicles (like the Thunderhammer)?

Yes, those were my designs. The [Wind] Reaper was mine. The Gatling was mine too, which had a working prototype built by [Senior Design Director and modelmaker] Don Deluca. Before the second year series was cancelled. I did the Wind Trap, Sprinter Station and developed the Battle Dashers (Wind Shear and Vortechs) with two other designers, Todd Wise and Dan Price.

Airlandia: Did you have a favorite toy?

The [Wind] Reaper was my favorite. I demonstrated the idea in front of the board members with prototype cobbled together from a Mattel Preschool sweeper.

Airlandia: The vehicles had this cool pictograph alphabet hidden on the sticker art. Do you know anything about that?

I developed the alphabet for the Air Raiders side. I took a graphics typography course in college, so it laid the ground work for developing a font. I do recall the tyrant letters being a bit challenging to decipher. I think [production designer] Dave Slayton may have done the Tyrants alphabet.*

*Note: I did contact Mr. Slayton and he sadly did not remember anything connected to Air Raiders.

Airlandia: I’ve seen Air Raider art made with pencils, inks, paints and more. Did you have a favorite medium to work in when doing these designs?

I used whatever medium I had around!

Airlandia: Why did the Twin Lightning (and Hawkwind actually) not have hinges on their cockpit windows? Was that a better fit for the figures or maybe a cost savings?

No hinges because of breakage.

Airlandia:I had a couple Reaper questions: There was a tower pod in the back, did that function like the pump handle/gun towers for some of the larger toys in the line?

Yes, the tower would have been a pump just like the [Command Outpost and Thunderhammer]. 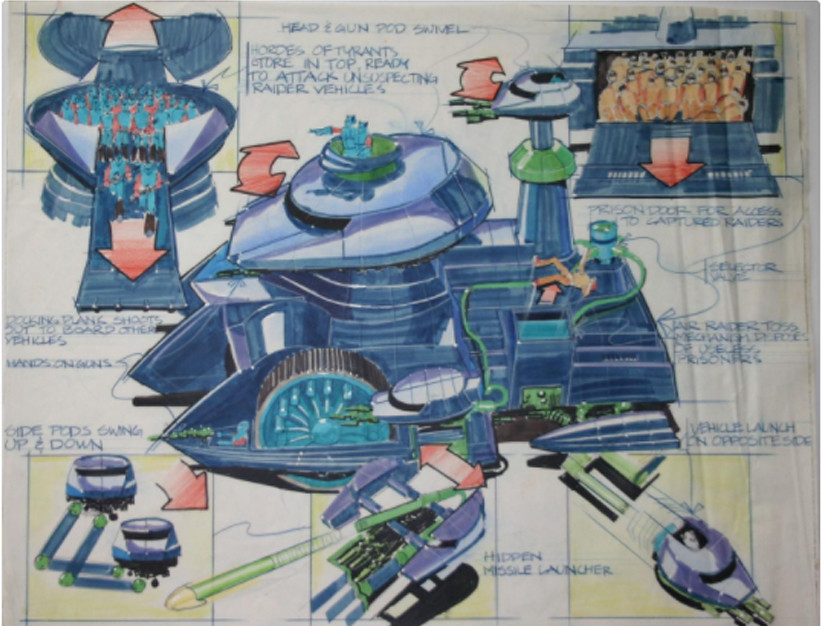 Actually, I don’t remember how many scissors pods were on each side of the prototype. I was intent on putting them on both sides for sure.

Airlandia: Would the Gatling and the [Wind] Reaper have been part of the canceled second series? Would they have been in the same size and price category as the Thunderhammer or the Twin Lightning?

The [Wind] Reaper and the Gatling were year three toys, as I recall. Reaper was to battle the air raider mother ship at the same price point and size. Prototype was really good at sweeping up lots of figures. The Air Raiders were doomed! Dan Price designed the mother ship.*

*Note: I checked with Dan Price and he didn’t remember any mother ship designs. It more than likely never made it past the initial design sketches.

Airlandia: On to the Gatling! Did those bladed prongs/landing gear on the front do anything or were they just for propping it up?

Blades on front were to allow it to be set down for display and not tip over. To the active imagination, they were canard style stabilizers for in flight control. 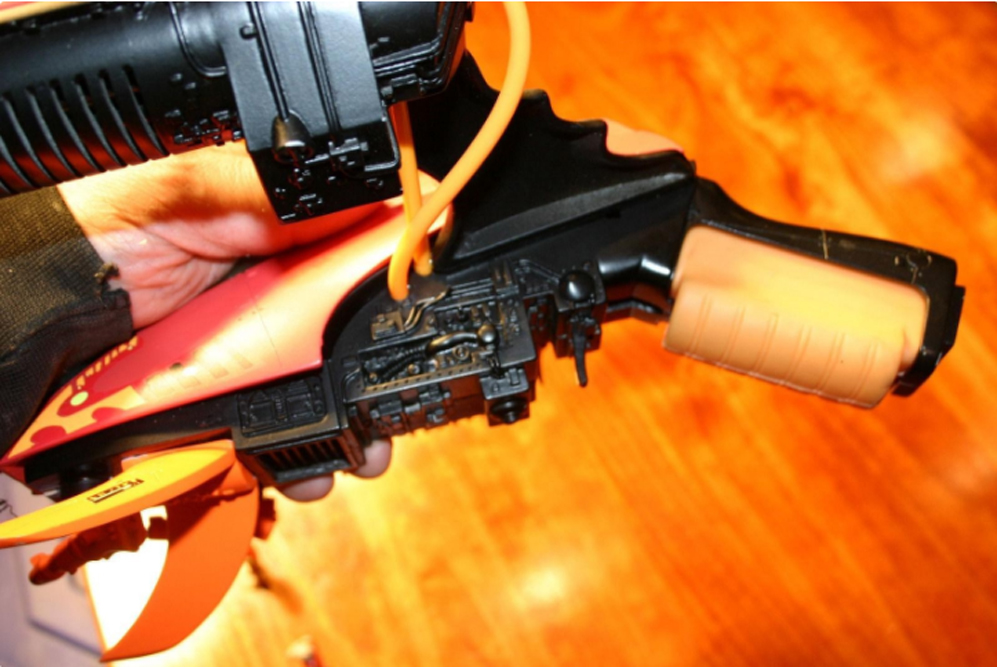 Airlandia: I see two tubes; were they both necessary to operate the gatling missile launcher or was there a second air-powered feature?

I recall the one tube turns a piston that rotates the gatling while the other shoots the missile. The mechanism was a bit finicky but we were able to get it to work pretty reliably in the show models. The first prototype was made by Don Deluca from a sketch I provided.

Big thanks to Fred Rieber, an amazing designer. He created some of our favorite toys like the Command Outpost, Thunderhammer, and the Twin Lightning. I really wish we could have seen the Gatling and Wind Reaper in action but it is nice to know a little more information about them as well as who designed them! It’s interesting that he mentioned them being part of a potential third year of toys, something that was mentioned by product designer Dave McDonald as well.

2 thoughts on “An Interview With Product Designer Fred Rieber”