So there’s been quite a few prototypes posted on ebay lately. We’ve already seen an Enforcer as well as pilots for the Twin Lightning and Hawkwind. Up next is another figure but this one is pretty exciting. It’s a soldier from the second series of canceled Air Raider toys, one of the new Enforcer types. 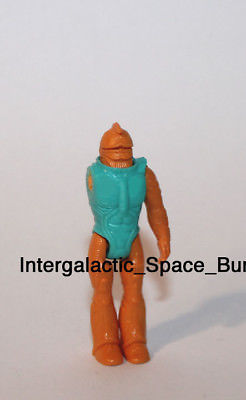 Seeing as how it’s only the third figure found from that group to show up, I was very happy to come across it.

Unfortunately there’s very little info on it, no name or squad designation. The seller mentioned having bought it a decade or so ago, so who knows who sold it at this point. My guess is one of the original designers threw some stuff up on ebay.

One curious note, the right arm is broken, what is with these prototype figures and their broken right arms? Also, the color is different. 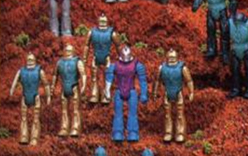 The figures from the catalog (I think they match) have golden arms, legs and head with a slate blue torso. This one has much more garish colors; a bright teal torso with orange limbs. I can only speculate that this was either:

1) A post-catalog photo shoot repaint, maybe what the final product would have looked like.
2) A pre-catalog color scheme that was passed over before settling on the final color choice.
3) Another variant/repaint that would have come out?

The design is interesting and not at all what I thought it was while squinting at the smaller pictures from the catalog. He seems to have an WW1 Adrian style helmet with a slit visor and some sort of metal grating as a mouth/chin guard. The chest seems to have an air hose of some sort but I can’t make out any more details. The body overall reminds me of the Air Raider Battle Squad soldier.

I’m hoping the seller may post a few more detailed shots if this continues to hang around.