Over the years, I remember looking at Air Raiders toys online once in a while. There weren’t (and still aren’t) too many sites that really bothered with them. Those that did always talked about the figures and vehicles we all know and love but not much more, because there was little to go on besides the Air Refinery which was the mythical Holy Grail of AR toys (the mail-away Emperor and Jolt were only rumors for a while too).

Everyone has always thought that Hasbro didn’t like the sales figures of the toyline that came out in ’87 so they canceled it before anything else was ever designed or made. And I pretty much agreed with that too. That is, until a few weeks ago…

Enter replicant01 (from LittleRubberGuys.com board) who had picked up some mystery figures on ebay. They were the same size as the Raiders and Tyrants and even had the little foot slot!

Some of the details threw him off, especially the fact that the figure held a small pistol unlike anyone else in the line. Eventually he made a breakthrough and found a site with a catalog from ’88. And that’s where we find the lost Series 2 of Air Raider toys.

First off, WOW. I’m still blown away that no one ever posted this catalog or the info within somewhere else besides the Facebook page that replicant01 tracked it done on. What an amazing find! 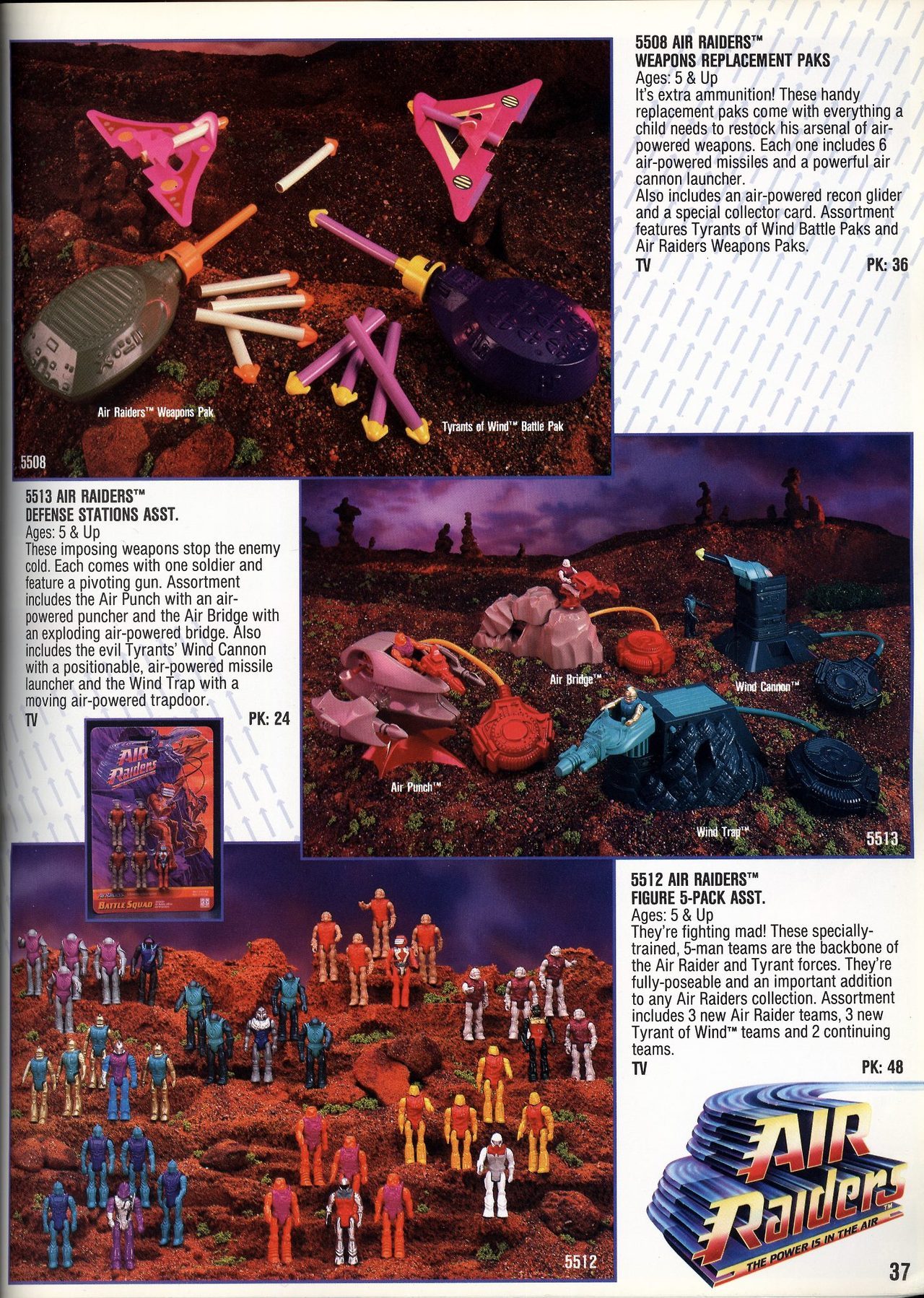 I’ll start with the Weapon Replacement packs which have cannons and gliders for both sides. It’s interesting that they ditched the hard plastic frame for the cannon and now there’s just the bellows. It appears to be the older design or mold as the top rune markings look very similar to what I own. Otherwise they are just recycling an old design here to save money!
And the rebels got their own glider! It looks decked out in similar colors to the Thunderhammer.
I wonder if any rebel vehicles were going to have the glider launch option. New colors for everything, even the missiles.Very nice.

Next up is the Defense Stations. I drooled over these as I always wanted more outpost/base platforms for both sides to defend their territory against the enemy. The Air Raiders have the Air Punch and the Air Bridge. Both have very exciting gun mounts with the Air Bridge actually having a seat for a rebel soldier to sit in (love that!). Their special abilities are a little odd. I guess the Air Bridge would collapse on anyone who attacked their position and I can’t really figure out how the punching mechanism works on the Air Punch due to the photo angle and resolution. The Tyrants continue their wind-naming trope and bring out the Wind Cannon and Wind Trap.  The Wind Trap has another cool gun mount for a Tyrant to sit in but it’s ability is even stranger than the other two. A trapdoor! The Wind Cannon is by far the best of the bunch as it’s similar to the cannon mounts for the Command Outpost. Speaking of the bellows, love the new designs on these and that each station has their own so you don’t have to attach it to another vehicle or base. I wish the Raiders had gotten something like this too. One other note, I love the color scheme of the Tyrants but the liver and red palette for the Air Raiders is a little blah. No stickers for these guys.

On to the new figures. We’ve speculated that there’s 8-10 new figure designs alone once you take out the obvious repaints. The G.A.S.P. and the Power Axe seem to have a commander type in them, but I can’t be sure (see more here). The Tyrants have some cool medieval knight/robot designs going for them. The Air Raiders are little harder to distinguish because of the lighter plastic colors on the newer models but they seem to have some new gas mask and respirator looking helmets. The orange/magenta ones might have some of bionic eye as well.

I’m actually curious what the purpose of the multiple squads were, as the first toyline only had the one foot soldier for each side along with several officers. Here we have 3 new squads of foot soldiers and 3-4 new officer types. I guess 1-2 of those could be more pilot figures to go with the vehicles. Maybe there’s another baron and his Noble Legion bodyguard mixed in here?

The next page has the new Battle Dashers. The Air Raider Vortechs is a larger Thunderclaw with a similar color palette and the ability to pivot 360 degrees. Considering the badass cannon it has mounted on the back, that’s a useful tool to have! This is probably my favorite rebel design; a very elegant, powerful looking vehicle. The Tyrant Wind Shear is the big brother of the Wind Seeker and another fantastic design. It has front fenders that “scissor out to attack their enemy.” I assume this is not air-powered, more like the manually-operated claw mechanism on the Thunderclaw. It has another powerful back-mounted gun (the toyline seems to love these) as well as an interesting canopy cover the for the driver. 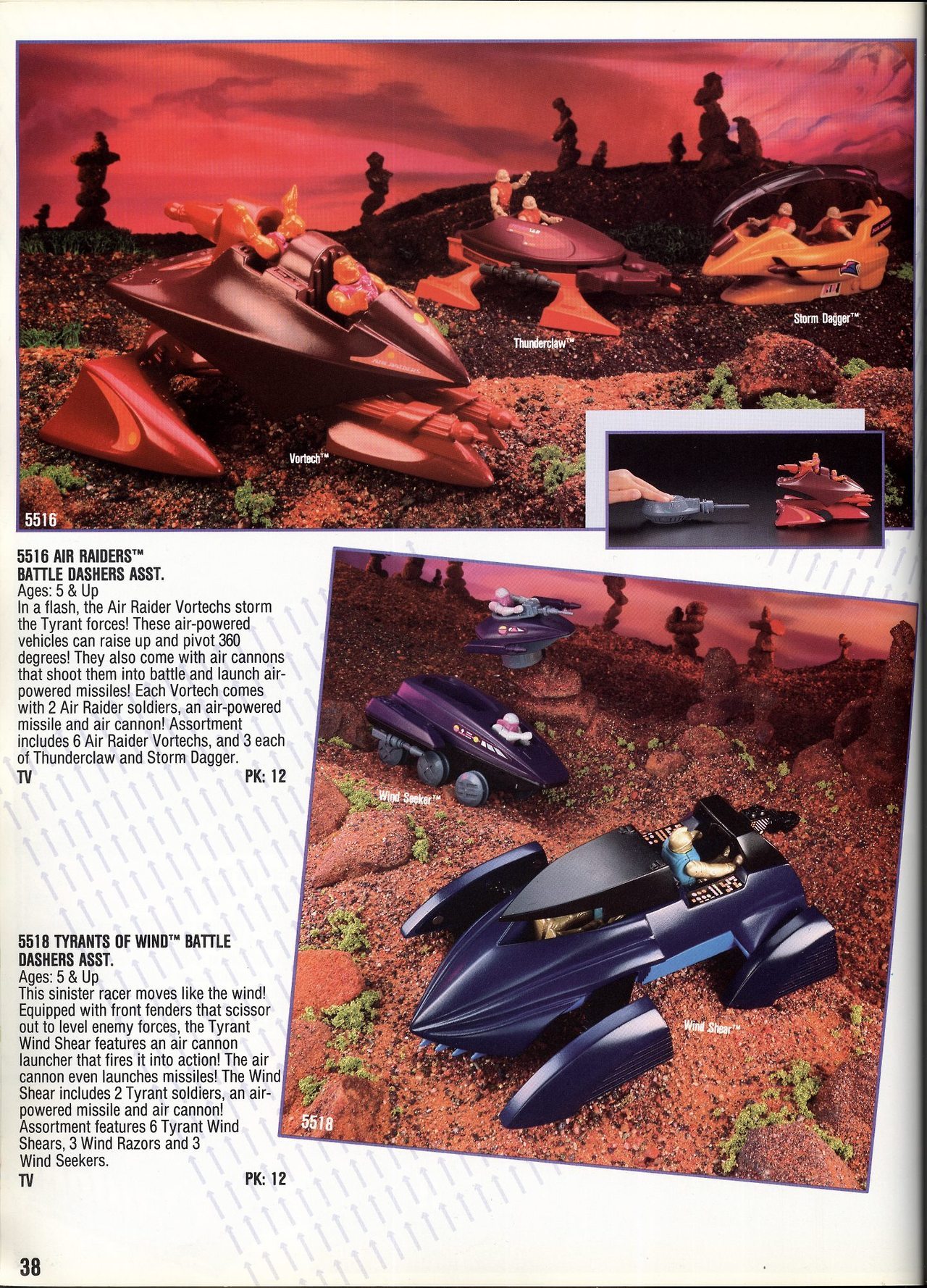 The final page has the mini-outposts which are another interesting idea. The Tyrant Scout Patrol looks very impressive with a swift-looking scout car and a nasty double-barreled defense cannon (see more here). The Air Raider Sprinter Station is an interesting design too. The set has a similar missile/scout car launch feature but a smaller black rear cannon. The missile launchers are vertical as opposed to the horizontal ones that slot in on the Scout Patrol. I wonder if the scout cars have some additional ability? The rebel scout car also looks has a DaVinci-esque ram in the front which resembles the doors on the Command Outpost.  The bellows that accompany these are not as cool and elaborate as the ones with the Defense Stations. I like the colors better on the rebel station too and the Tyrant ones are awesome as ever. 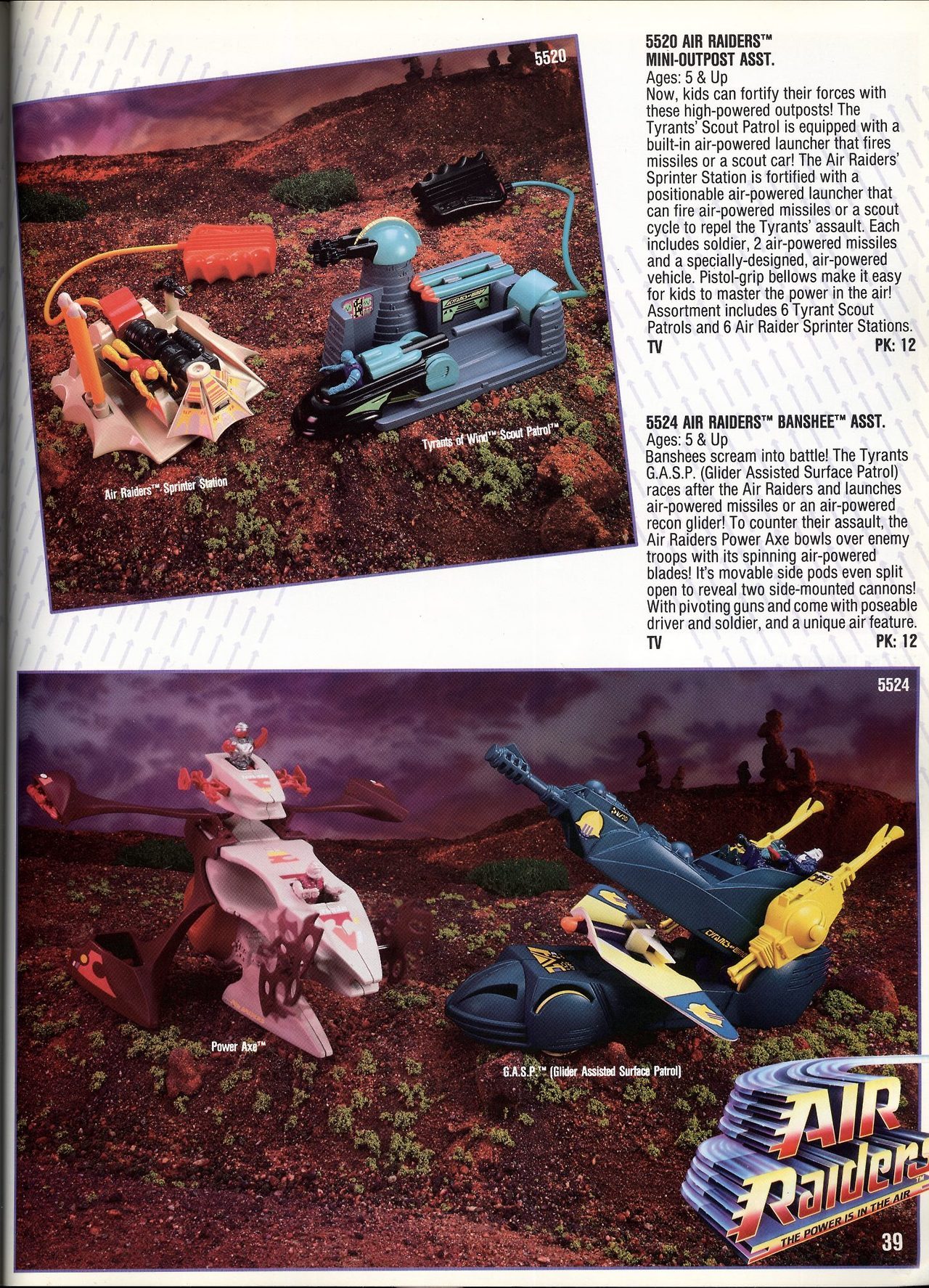 Last is the Banshee-class vehicles, the Power Axe and the G.A.S.P. which seem to be the equals of the Twin Lightning and Hawkwind. The Power Axe is like a mini Man-O-War with an array of guns including two that are hidden and pop out on the winged side pods. The big feature is some spinning air-powered blades mounted in front with a bellows of some sort attached to the back. The G.A.S.P.  is a mobile artillery tank with a huge cannon that can arc it’s body up to reveal a missile launcher that shoots a glider/missiles. In addition there’s a double-sided cannon mounted on either side, or maybe it’s just the lever mechanism to reveal the missile launcher? This vehicle is another one of the mysteries in this group, I don’t even see a bellows but I assume it has to have one that wasn’t attached.

One thing that struck me, none of these vehicles had the hand pump feature that the larger vehicles had. I wonder if they gave up on that or if there was other bigger stuff planned or maybe it wasn’t possible with the smaller stuff. It seems like it would have made more sense for the Mini-Outposts and Defense Stations though.

Well, that’s it! Overall, I loved this series. I definitely had a geeky moment looking through these pictures. It reminded of all the times I wondered what a second release would’ve looked like.
Now we know (bittersweet though it is)!

9 thoughts on “The Forgotten Toys”