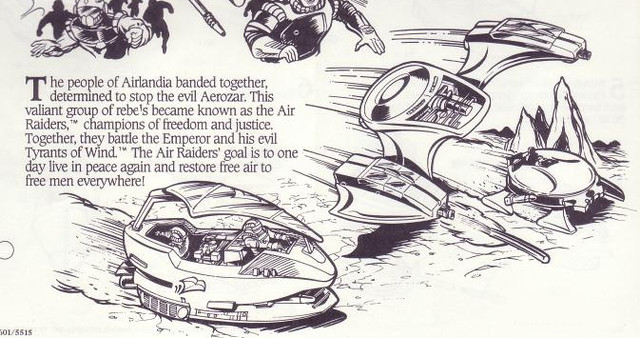 Richard Marcej graduated from the Art Institute of Pittsburgh, and began working for Hasbro as an illustrator, graphic designer and package designer in the fall of 1983. His work covered a wide range of Hasbro properties including Transformers, GI Joe, My Little Pony, InHumanoids and Army Ants, which he was responsible for not only the package design and illustrations but the overall design of the toys themselves. He has gone on to work for Hallmark and K’Nex among other companies and produces his own daily comic.
I reached out to Richard because I hoped to talk with someone who played a big role in the visuals of the Air Raiders and get a sense what it was like working on those wonderful ’80s toylines.
Airlandia: One of the things I’d like to understand more is what working in a toy art department was like.
Marcej: When I was hired in Nov. of ’83, I was the 9th artist in the Art Department/Packaging Department. Within 2 years we’d grown to over 30-35 artists. The department was in control of designing the package art, logos, illustrations, artwork for color-by-number sets, instructions, etc. The sculptors were with the designers in R&D.
Airlandia: I read somewhere that you designed Army Ants. Did you ever get any input on toy design with Air Raiders or any other line?
Marcej: Not really. I did hang out with Bart Sears & Mark Pennington, two designers in R&D who designed COPS ’N Crooks, but the only toy I had 100% input in was Army Ants. They were all mine.
Airlandia: Did you get to choose any of the projects/toylines you worked on?
Marcej:When I was there the assignments were steered this way; Men would get boy’s toys, women would get girl’s toys, people with families would work on baby toys, etc. With occasional exceptions (I did all artwork for the My Little Pony Color By Number Sets for example), I worked mainly with boy’s toys.
Airlandia: I’ve seen your range of paintings and pen and ink illustrations. Do you have a favorite medium to work in?
Marcej: I love working in B&W, especially with pen & ink.
Airlandia: Have you switched to digital? I actually went to art school for illustration and most of my peers switched to the Mac, very few paint on canvas these days.
Marcej:In 1991 Hallmark began buying Macs for all the artists. So I taught myself to use one around ’91-92. Going forward we would decide the best method for our work, so one project I’d paint with acrylic on canvas, the next project I might paint in Photoshop, etc. It was a great way to integrate working on the boards and working on the computer. Even today, I draw & ink all my comic strips on paper, scan them in and clean them up in Photoshop. There’s no reason to completely abandon actual drawing or painting. 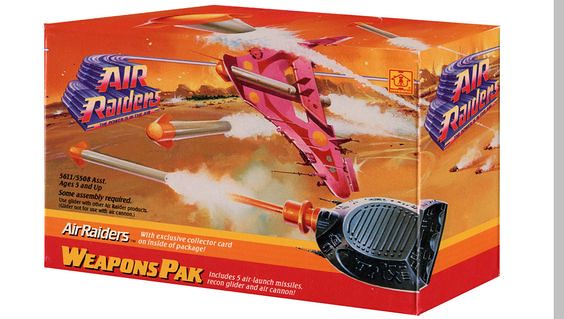 Airlandia: One of the reasons I stumbled across your Pinterest page was some box art for Air Raiders. It depicted the Weapons Pak (cannon and glider), a set from the second series of toys that was never released. Most people don’t even know about it. Did you do more box designs for the rest of that series or was it canceled after you finished the first one?

Marcej:I don’t remember. By the winter of 1988 I was looking to get out of Hasbro and did finally leave in April of 1989 to go to Hallmark. So I can’t say whether I was working on the second series of Air Raiders then. I know I was doing a lot of COPS N’ Crooks work at that time. So much so, that after I left to move to work in Kansas City with Hallmark, I was also freelancing for Hasbro on my off hours, still painting all the final illustrations for the second year COPS N’ Crooks packaging.
Airlandia: A follow up to that question: did you do the illustrations and design for the first series of toy boxes? I’ve always wondered who that illustrator was.
Marcej:I don’t remember who did the final illustrations. More than likely I laid out the package art and handed the drawings to an illustrator. By 1987-88 we had at least two full-time illustrators in the department, Doug Hart & David Graves, but I don’t remember if either of them painted the Air Raiders pieces.
Airlandia: The Air Raider boxes came with little inserts depicting pen and ink drawings of everything from vehicles to local wildlife to natural hazards. Did you draw all of these? How much creative control did they give you?
Marcej:I did all the B&W illustrations for everything inside the packaging, which included the comic story on the backside of the instructions, and had pretty much total creative control. I also did all B&W Air Raiders illustrations for the Hasbro Style Guide. 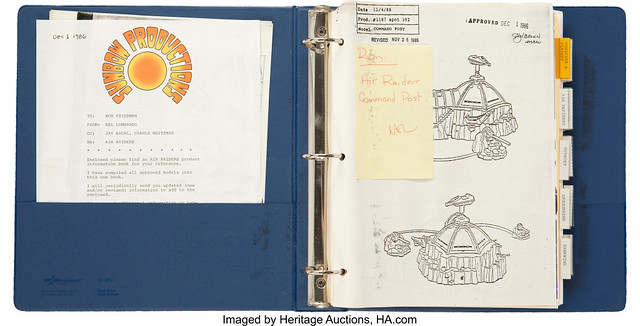 Airlandia: Did Hasbro let you keep the work you did on the toys? Do you still have all that Air Raider art?
Marcej: I kept as much as I could. I’ve sold A LOT of the artwork over the years, though I may have a few of the B&W Air Raiders figures illustrations in my files.
A big thank you to Richard! I found the fact that he actually sketched out the box art and then handed it on to an in-house illustrator to paint to be really interesting. And that in addition to the black/white art that came with all the wonderful Airlandia box inserts, he also did the illustrations for the instructions on the other side.
Richard Marcej
Home site
Pinterest

5 thoughts on “An Interview With Former Hasbro Illustrator, Richard Marcej”