The Power is in the Air!
Imagine a world where everything runs on air… a world where air is more precious than gold. Enter the world of Airlandia, where the evil Tyrants of Wind have seized control and force everyone to pay tribute to their corrupt and iron-fisted monarchy. Only the Air Raiders, a group of valiant rebels, defy the villainous Tyrants of Wind and are determined to make air free for everyone. With a convoy of high-powered air vehicles, these brave champions of freedom battle the Tyrants, raiding air refineries and defending the rights of all Airlandians.

Thanks to replicant01 for sharing his maps of Airlandia. He sent two of them to me and I cleaned them up in Photoshop to make one good master copy. A high-res version will be placed in the downloads section in the left sidebar.

There are a lot of interesting landmarks across the map from the Whirlwind Basin to the Cyclone Caverns to Thunderhead Peak. There are the Bubble Dome Kingdoms which seem to have the airdomes mentioned in the comics but then there are the Wind Farm Territories which seem to have farms and trees growing outside, exposed to the damaged atmosphere. Fogs, mists and even volcanoes dot the landscape. It’s too bad that none of this was ever explored, even in the comics. 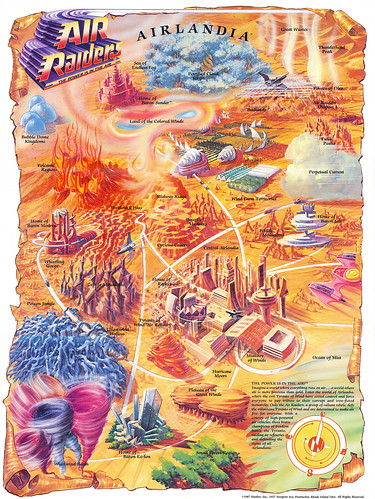