Last post saw us go over the original background story for the Air Raiders (or Air Masters) in the Pacific Ocean. Now it’s time to share one of my favorite pieces which is the original vehicle proposal for the toys.

It dates back to September 28, 1985 and was created by Steve Reiss (see Part 1). This actually predates the “Product Idea Form” they filled out in November, 1985 (see Part 2). I wonder if it came after the Pacific Island story as the vehicles were more refined than “Tank-Air.”

First off is the Shrike, in my opinion the predecessor to the Wind Seeker. It looks as though it has the same mounted side cannons, although a small one mounted forward was dropped. The main feature, rather than a hover pod that detached, was a gun mount that elevated up and down. It lacks the six wheels but almost looks like it had one large rear wheel.

The launch bellows came with it and did not get squeezed, rather you hammered your hand down on an accordion-like top to push the Shrike out and away. I wonder how well that would have worked.

Next is the Thundacloud, which has a lot of the features of the Thunderhammer including the missile launchers, the pump handle and the ram front. It also had a siren ability! I assume this was like a whistle. I love this design, especially the cool-looking pump handle and that monstrous engine mounted on the back.

Even bigger is the Leviathan Mobile Fortress which reminds me of the Jawa Sandcrawler from Star Wars. This thing is armed to the teeth! It has twelve guns and missile launchers that I can make out. It would have had several Man-O-War abilities like the fan-driven hover ball, the launching mini-vehicle (or fighter pod), another siren and it looks as though it may have had the Dragonwind glider feature with the launcher being able to retract into the vehicle! Not only that but the pump would have kept a charge of 25 uses? Huh, maybe that means it would have been like the Super Soaker water guns I had as a kid. The drawings show the rotary valve function for assigning the pump to different features that the larger Air Raider vehicles ended up with. 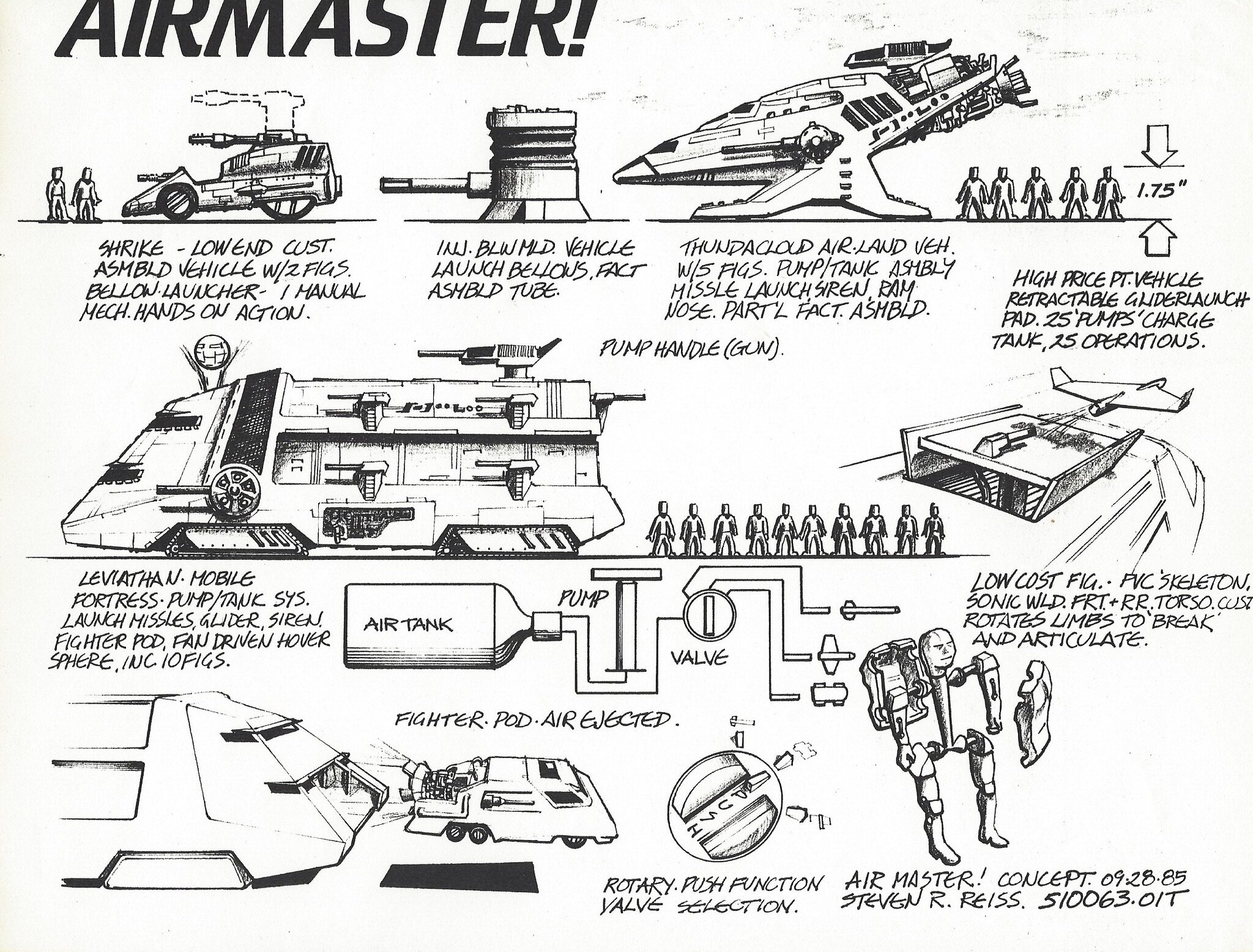 Lastly, we see the original design for how the figures would be built. Overall it doesn’t look like much changed from the original idea aside from the arms, legs and head being connected on a central piece.