Airlandia: Here’s the next post in a series that gives fans a chance to explain how they would relaunch the Air Raiders in today’s market. Heli, our resident Hawkwind fanatic, will take it from here:

Heli: Air Raiders is a wonderful, unique line, so any relaunch should strive to hold onto the qualities that define the line.  To me, that means that you’ve got to keep the air gimmick, and you have to keep the scale.  The “green army men” aspect of the line is a big part of its identity, in my eyes.

However, technology has progressed, and we see plenty of figures these days in a similar scale to the troopers in Air Raiders, but with vastly improved articulation.  Certainly, lines like the Diaclone Reboot show what can be done at a tiny scale, but even on store shelves here in America, Mattel is producing Mega Construx minifigures with as much articulation as a classic GI Joe figure, but at the Air Raiders scale.  I’d be sad to lose the easy army building you can get from figures with just a couple of cut joints, but the dynamism and variety that would be created would be worth the trade off. 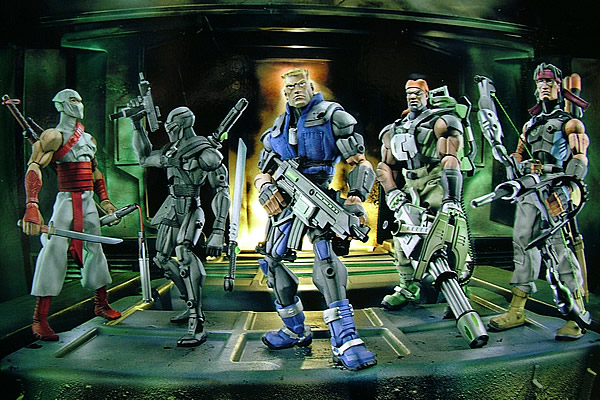 Alternately, maybe non-articulated (but action posed) figures could be sold in multi-packs for army building.  That could keep the cost low enough for an impulse pick-up, but still give kids and collectors some more options than just a bunch of guys standing around raising their arms.  Hasbro experimented with a similar idea as part of their GI Joe Sigma Six line.  Sadly, it didn’t really catch on, but I think there’s some potential for this as a lower cost alternative.

I think the real key, though, is that the line should merge with Nerf, bringing the Nerf team’s years of experience and success with various air- and spring-powered projectiles to bear on the (let’s face it) kind of underwhelming air gimmicks that plague the vintage line.  As effective as the small, straw-like missiles of the old days were and still are, the vehicles that tried to be more innovative frequently just didn’t live up.  I don’t think the guys who design Nerf blasters would be satisfied with a barely-moving battering ram or a glider that’s lucky to survive its first launch.  I think adding the Nerf branding might also bring some eyes to the line that might otherwise pass it by.  Admittedly, part of the Nerf thing is that I always used to think that Air Raiders already had Nerf darts, but I really do think they’d be a great addition.  Imagine a volley of Rival-style ball ammo flooding a battlefield full of Air Raiders figures! 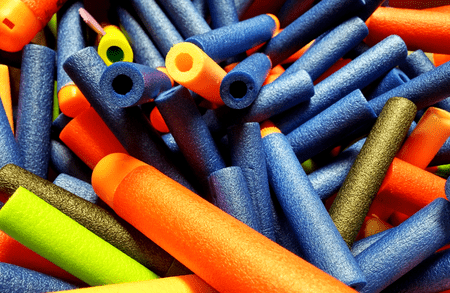 Incorporating Nerf launchers would be a challenge, as the darts have a larger diameter than classic Air Raiders ammo, but I think it could be done, maybe even with existing molds.  Maybe instead of the twin launchers of the classic Hawkwind, we could have a single launcher where the ammo storage is now, and replace the side blasters with molded weapons.  Something like the Man O War would barely need a refit; just slight modifications.  The Dragonwind’s hidden missile launcher space could easily be expanded to fill some of the wasted space in the back of the vehicle.  I think it’s possible.  Heck; maybe smaller Nerf ammo is possible, too, to use more of the existing vehicles.

Then again, as much as I love the line now, maybe fresh designs are called for; this blog has shown several concepts that were tossed around (and the Gatling would barely need any work to incorporate Nerf tech).  I think Hasbro still has talented and creative people who would love to have the kind of freedom the 80s design team had, and who could create tons of new ideas that capture the spirit of the past and launch it into the future.  I would selfishly love an initial wave based on the original vehicles, to tie the relaunch to the classic line and give a new audience the opportunity to own the beautiful vintage designs.

In reality, I suspect a relaunch would require some kind of big media push (maybe just as a web series, rather than trying to mount a feature movie or market a TV series), as no big companies seem interested in lines that aren’t tie ins, but I’d be perfectly happy with a toy-only revival.  The lore of Air Raiders was never a big concern for me; I think the toys speak for themselves, and I think they could again.

Airlandia: Big thanks to Heli for his thoughts. I’m really coming around on some of these ideas, especially using Nerf tech.

And if you’d like to read more relaunch ideas, check these out:

Air Raiders Relaunch, Part Two – To Theme or Not to Theme?