On February 15, 1987, the Hartford Courant wrote an article about the 1987 New York Toy Fair and the expected hits of the year. It mentions Coleco’s Starcom and Cabbage Patch toys, Legos and Hasbro, but I also saw a little blurb about Air Raiders (and Visionaries). According to Alfred C. Carosi, Jr., Corporate Vice President of Marketing:

“…the company hopes either Visionaries, figures and accessories using holograms, or Air Raiders, which use compressed air to power vehicles and propel figures through the air, will lead the boys’ toy category in 1987.”

Well, we all know how that worked out. 😦
I was curious about Mr. Carosi (Imagine if I could get an interview with him! He probably had a say in the cancellation of the cartoon), so I did some digging and found another article from the Chicago Tribune dated February 12, 1987. The article states:

When it comes to hype, there is nothing like Toy Fair.

Which is why a lot of the companies, particularly the big manufacturers, use professional actors to present their toy lines. Getting the buyer`s attention is the first hurdle.

Then the presenters slide deftly into the corporate advertising support to back the product. In the case of Air Raiders by Hasbro Inc., support will include a $6.5 million campaign tied to a television series.

Wait, what? Support for the Air Raiders would have included a television series? Either this reporter had old information given to him/her, or the decision not to move forward on the cartoon really came down to the wire since the toys were released less than six months later. Plus, I wonder what professional actor presented Air Raiders? Just imagine Sylvester Stallone singing the commercial jingle…

And lastly, here’s an October 12, 1987 article from the Arizona Republic, titled Winds of War, which had some major concerns about the military buildup in the toylines, referring to Air Raiders as “little more than futuristic guerillas.” I find the article interesting because I came across several similar ones that were almost hysterical with fear about the prospects of what this would to do to kids.

I mean, I turned out just fine…
*twitch* 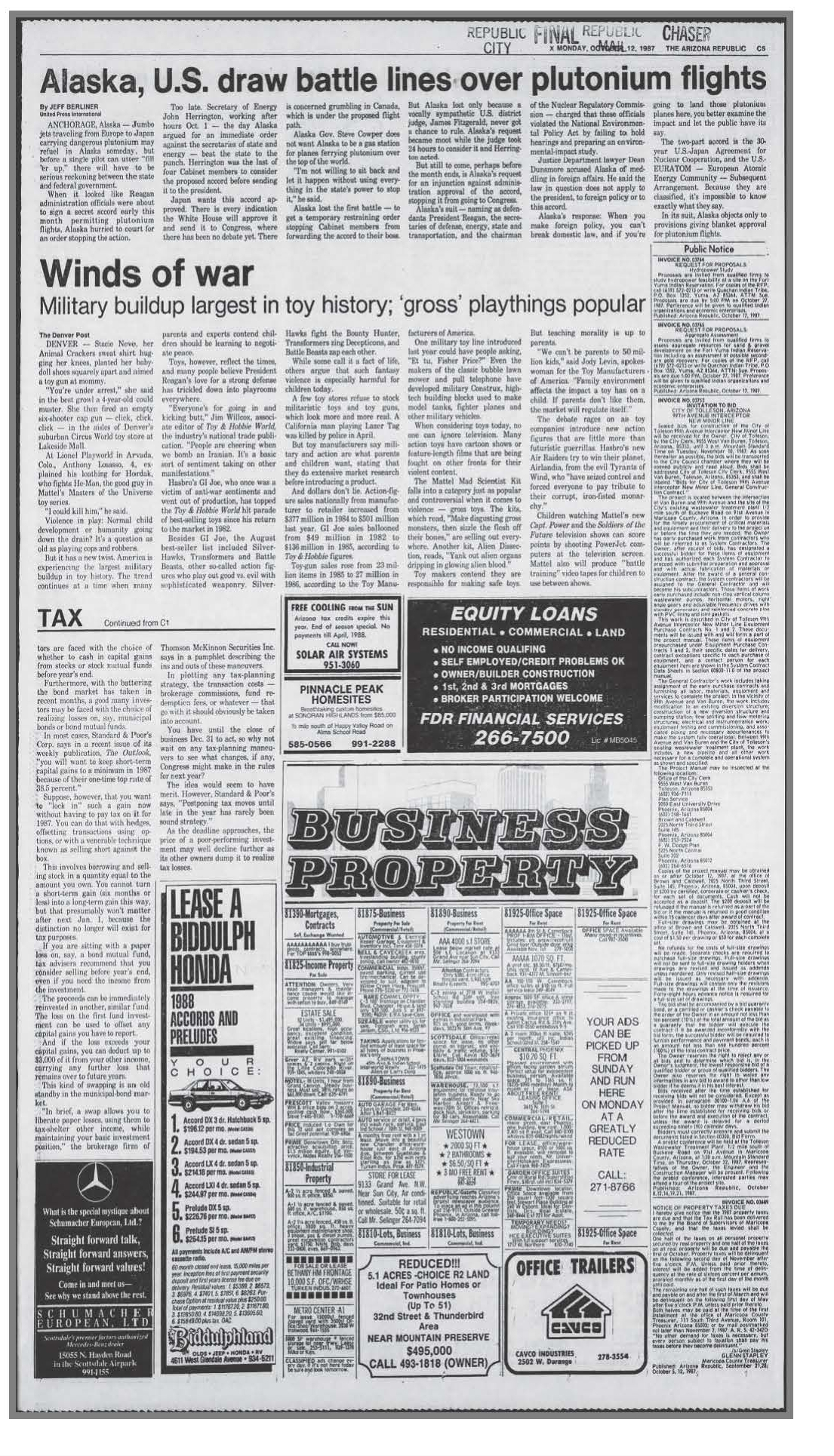 4 thoughts on “Air Raiders in the News”