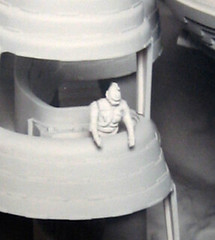 So I managed to obtain an amazing piece of Air Raiders history from a former Hasbro worker, and I just thought I’d share with everyone. It turns out that besides the prototypes to the current Air Raiders figures that we all know and love, there were also even earlier ones as well! We actually touched upon this figure briefly in a previous post about the Air Refinery as it had several strange looking figures posed within it’s lofty towers (left). They didn’t really look like the other figure designs, and initially I wasn’t even sure that they were associated with the line. Well, it turns out they were!

According to the employee:

[This is] the very first concept sculpture we did of what the Air Raiders figures could be like to help sell the concept to leadership.We really liked the scale and detail, but the design was just a little too “Jules Verne” and retro — we wanted a more sci-fi/futuristic feel.

So here’s some shots. For the sake of brevity, I’m calling him General Stag, the earlier concept name for General Rokk. Although to be fair, I suspect he may have been an early Aerozar design as he shares certain features with the other prototype.

Anyways, General Stag is pretty cool, he has a Flash Gordon design in my eyes with the boots and belt and mohawk helmet. He also appears to have a middle-aged paunch too, lol. There are a ton of breathing tubes which does look like he could be one of Nemo’s sailors on board the Nautilus. One of the tubes connects to a mask which covers most of his face.

Stag looks and feels like he was hand carved from a chunk of plastic. It could be that they roughly made something and stuck it together or this was made by mold and the roughness still came through. His back actually has this… blank area, almost like it was cut from a mold but I can’t be sure. His feet are glued to some type of board to help stand because the pose is not steady at all, even with the base. His arms do move independently. In the last picture, you can see the pinholes they made for the arms and legs to fit into the torso, so the legs probably moved at one point as well. One other note, he has some tech-looking stuff on his chest and some ribbed armor across his shoulders.

That’s all for today, so a big welcome to General Stag. I’m very excited to add him to my collection (which I’ll have more to share on that later).