A curious thing happened to me the other day. I had bought several Man-O-War lots off ebay in the last month or so and I hadn’t taken as close a look as I thought. Two separate lots came in and both had two very different colored guns. 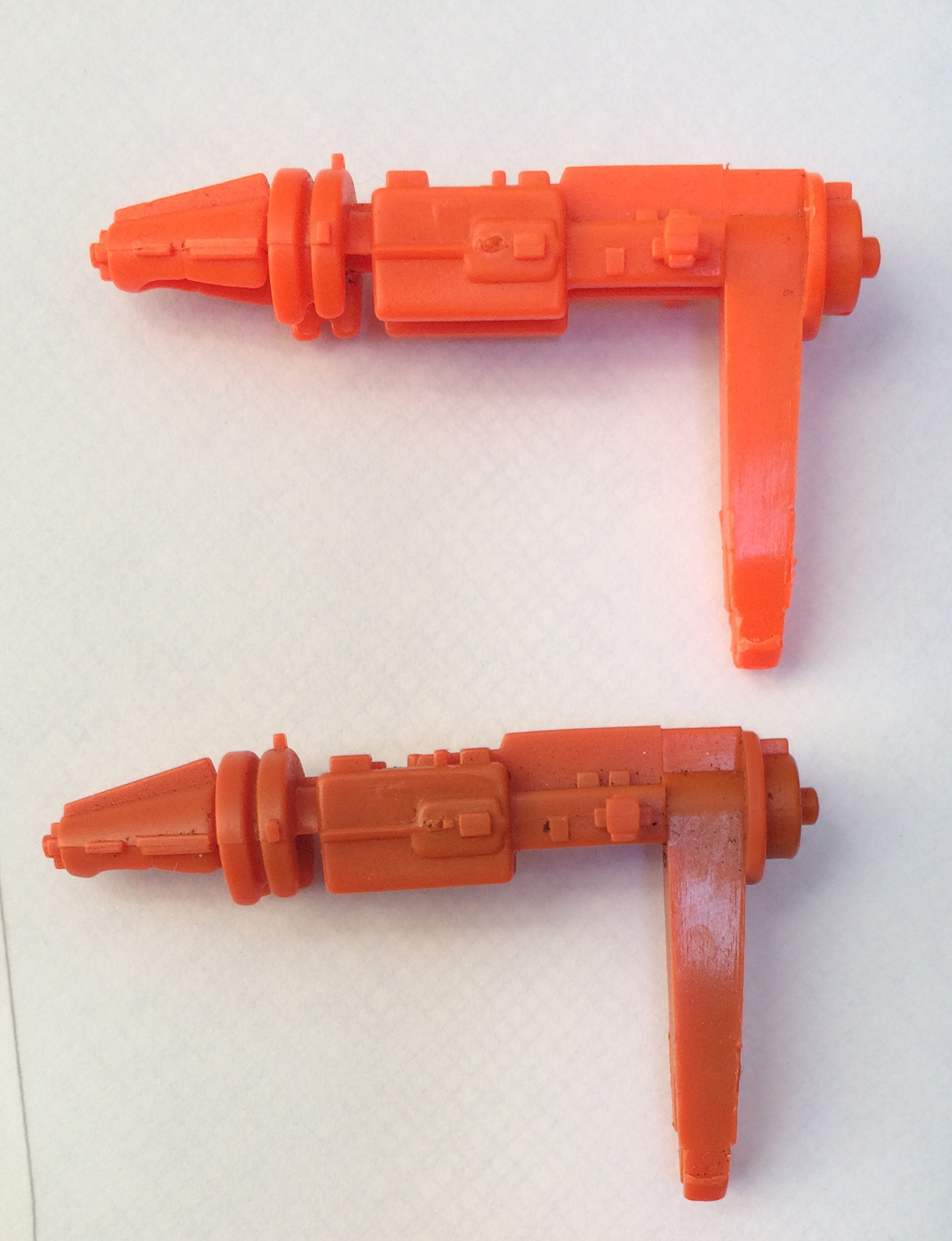 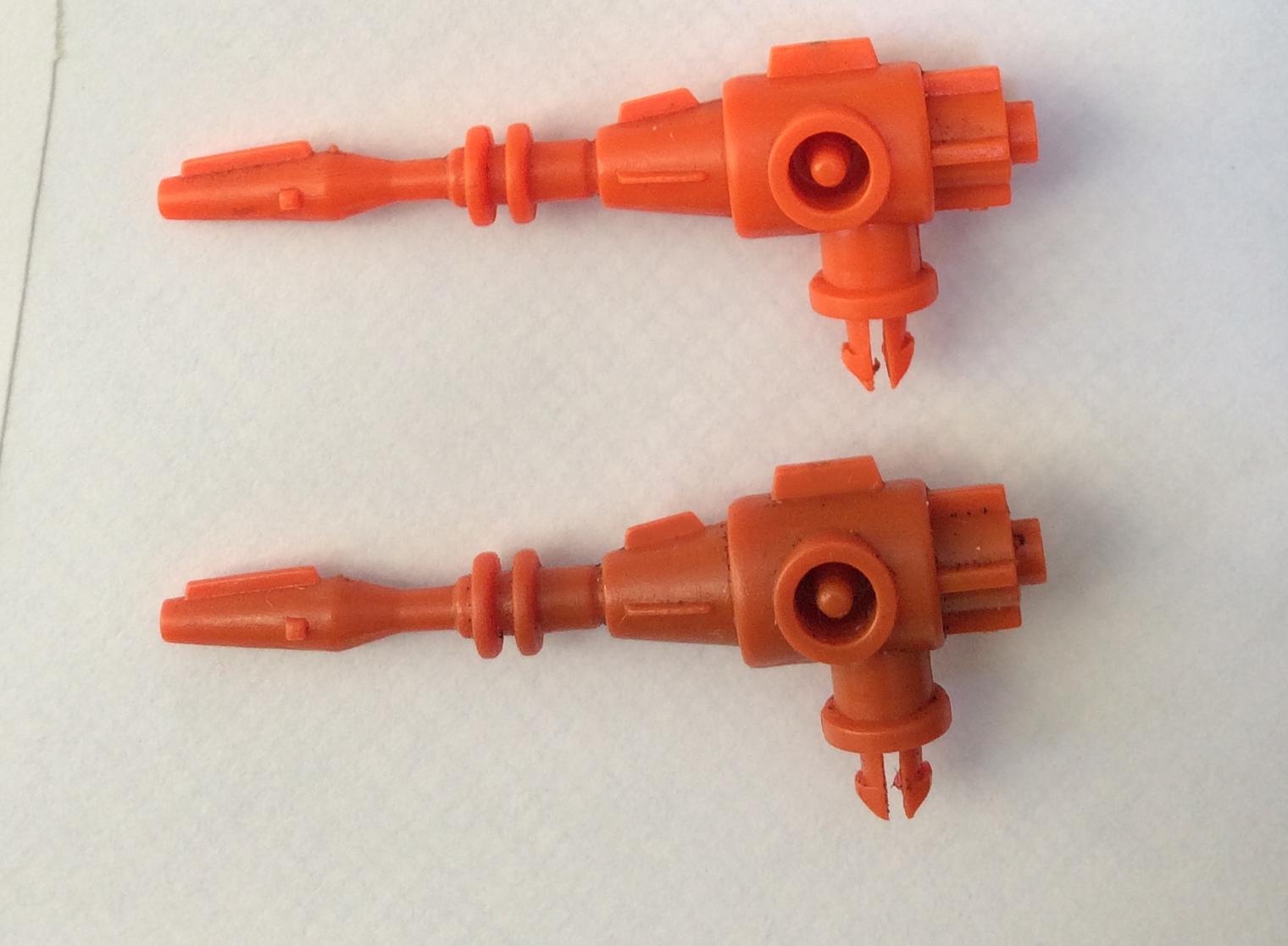 There’s obvious a noticeable difference between the classic orange color and this strange brown color. There’s no fading, it’s a solid color throughout.

At first I thought maybe it was just dirty. And then I was a little excited that it was some rare prototype parts! The only other explanation was the damage that can happen to plastic because of the conditions it’s been stored in. Now, I was aware of this mostly because I’d heard about it happening to various Transformers and GI Joe toys. Theories place the blame on UV exposure, heat exposure, acidic plastic bags and even just oxygen. Who knows? 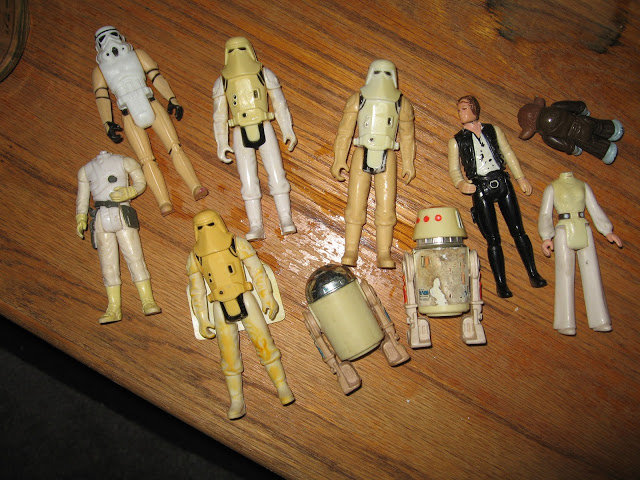 The prototype idea didn’t pan out as any pictures I could find showed the earliest models having bright red guns, not orange or brown.

I didn’t think it was the plastic degradation because I thought it was only white or light gray that was affected. I reached out to Dan Price, the creator of the Man-O-War, and he said:

The variation in color is most likely due to aging over time—as far as I know the color was never changed from the original, which was the brighter orange.  Sometimes there can be variations in production, but that’s not likely—unless—someone at the factory was a toy collector and wanted to create a short run of a random variation. 🙂  I guess you never know.  It also can happen if manufacturing moves to a different supplier (factory)—but don’t think that happened in this case.

So between my own research into this (learning that it can affect almost any color) and what Dan Price said, I guess these mystery guns are just like the rest of the damaged 80s toys. Anyone else have any experiences with this in regards to Air Raiders toys? This is a the first I’ve heard of it. Let me know.