Big thanks to airraiders1987 (from the Air Raiders fan site that actually inspired this site) for sharing this promo art for the Air Raiders cartoon that he received from a former worker associated with the production. Their email said:

“Came across your site and it jarred loose a memory or two. In the late 80’s, I was the head of promotion at Hasbro’s ad agency, Griffin Bacal. Part of my duties extended to our sister company, Sunbow Productions, and Hasbro’s syndicated distribution arm, Claster Television.

There WAS an Air Raiders animated series planned, along the lines of G.I.Joe, Transformers, MyLittle Pony, etc.  I’ve attached photos of the very modest pitch kit.”

The first two installments can be found here and here. They show the folder, paperwork and art that came with this cartoon promo pitch. I thought I had everything that was included but luckily there’s some more art to share! It looks like these may have been printed out on some high-quality glossy paper stock and included inside the folder.

The art shows who will be the primary heroes and villains for the series. Each has color art and a bio with it (the art is low res but the bios can be read in Air Raiders Cartoon, Part 1). All the characters look pretty much the same as they do in the comics and although Jolt is a little off from both the toy and the more purple-toned comic representation(where they refer to him as Kronax). They also toned down the Emperor’s garish colors. And I get a kick out of how BIG they made Master Sergeant Blot, it looks like he could eat Jolt!

And I have one more thought before closing and it involves the tease art for this blog post. It has Aerozar and Eeeleta (I presume) on either side of a man I thought was Rokk in earlier posts. But that art does not match the Rokk promo art here, in fact they look very different! I could buy the explanation that it was older art of Rokk but it makes no sense to have two competing images of the same character in your cartoon pitch.

So that leaves us with the question of who this other character was? 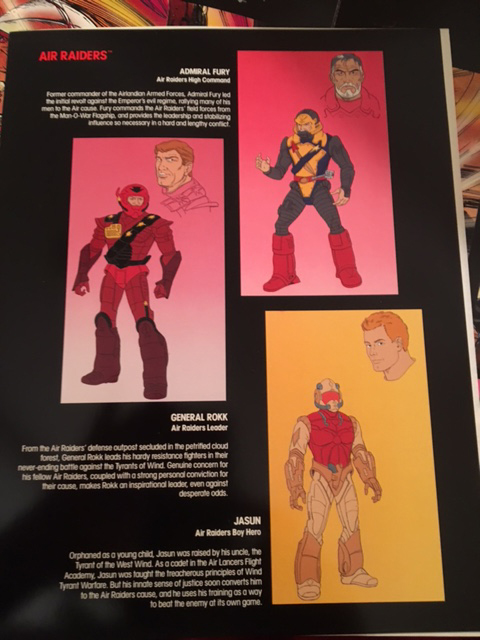 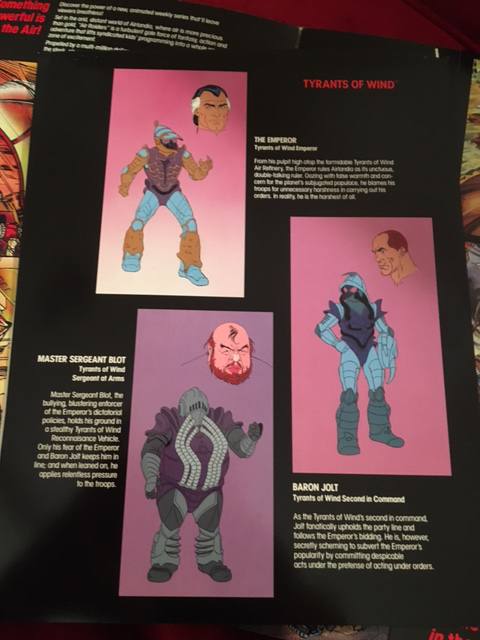