Airlandia: Did you have the same team working on the second series or did any designers move on to other toylines?

Price: I think it was basically the same team of designers, but it wasn’t uncommon for one designer to work on multiple lines.

Airlandia: A fellow fan discovered an old catalog that had an entire second wave of Air Raider toys. Did you work on these?

Price: Yes, the second year stuff was very cool — I designed the Power Axe from the catalog pages. 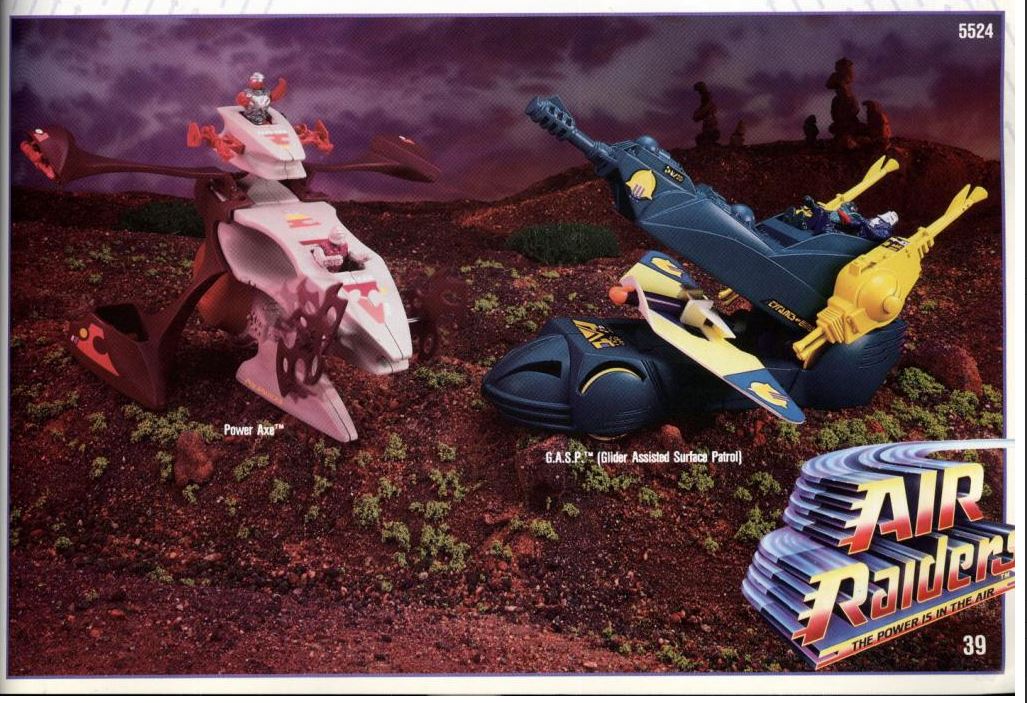 Airlandia: How did the Power Axe work? I see the spinning blades up front in the catalog picture but the angle blocks the back where some sort of bellows mechanism is. Did you have to repeatedly hit a pump to keep the blades spinning or did it work some other way?

Price: I don’t remember, sorry. It was a lower price point so the mechanism was probably not that complex.

(Airlandia Note: if it was a lower price point, I wonder if it had a pump action to spin the pumps, much like the bellows on the Twin Lightning. It seems like a motor would have been way too expensive based on previous answers.)

Airlandia: Did you keep the Power Axe?

Price: I remember the design and making the model of it, but I don’t remember ever bringing it home. I don’t think we ever got to production parts on it

Airlandia: Were there any ideas or designs for Air Raiders that you were part of that never saw the light of day?

Price: We developed a hand-launched foam glider that held an action figure fighter pilot in it that was very cool.  I remember lots of iterations to make it fly really well, which they did.  I learned a lot about glider wing design in that time.

Airlandia: How big were these? When I hear glider, I think of the fragile styrofoam glider that came with the Dragonwind but I assume these were much bigger and made of a nerf-like foam?

Price: Yes they were bigger, around 10-12” wingspan, and could hold one pilot figure—we didn’t get too far along on those, but yes it would have a nerf-like material for durability, vs. Styrofoam.

Airlandia: Did you do anything else for the second series?

Price: I did a concept design for a vehicle we were calling the ‘Cyclone’ that I really liked.

Airlandia: Okay, please tell us more.What did it look like?

Price: Hard to describe — it had kind of a ‘mach2/crustacean’ aesthetic going on.

Airlandia: Was it a smaller vehicle like the Wind Seeker or something larger like the Thunderhammer or even the Man-O-War?

Airlandia: Every Air Raider vehicle seems to have a unique feature like the Thunderhammer ram or the Thunderclaw pincer. What was the Cyclone’s special ability?

Price: Sorry — don’t really remember — we had this one feature we were looking at where the missiles curved in flight due to their fin design, and you could shoot two missiles at once, and they would curve outward and then simultaneously converge back in on your target.

Airlandia: I assume, since most of the bad guys always had vehicles named “Wind XXXX” as the name, that this vehicle was for the good guys?

Price: Yes, this would have been for the good guys.

Airlandia: Any idea what happened to all those models that were made for the catalogs but never produced (The 2nd series toys and even the Air Refinery)?

Price: One of the fun parts of toy collecting, right?  I wish I did—some of them might still be in the Hasbro offices somewhere, but I would think that highly unlikely, especially since the line was not considered a success at the time.  I think they probably made their way home with the designers or were discarded.  There are a lot more collectors now than there were then, which I guess it what makes these things so rare—we didn’t really think too much to keep them.

Airlandia: What other toylines did you work on and did you have any favorites?

Price: I loved Tonka, worked on that for several years—I was on the team that created ‘Chuck My Talkin’ Truck’, a very endearing preschool toy.

My wife and I also had our own toy invention company for three years, called Wild Blue Invention & Design—we created a toy line called NakNak that was out there for a year, from Hasbro—did well for us as inventors but not well enough to go to a second year—still really like the ‘stacking’ play pattern in that, very fun and long-lasting—the little blocky figures also had these clicking joints in their arms & legs, kind of addicting—there’s just something about a good click:)

Airlandia: Any more thoughts on your time working on the Air Raiders?

Price: It was a team effort among a small group of very talented and creative people I was lucky enough to work with—it was a lot of fun!

(Airlandia note: the sketches that acted as teasers for these two posts were drawn by Dan Price.)