Dan Price was a designer for Hasbro starting back in the ’80s. He worked on several lines besides Air Raiders including Tonka and WWF wrestling figures. He went from a Product Designer all the way up to Vice President of Design during his time at Hasbro. I’m very grateful to him for sitting down to answer the many questions I had.

Airlandia: At the time Air Raiders came out, you were a Product Designer. Can you tell us about the initial concept? 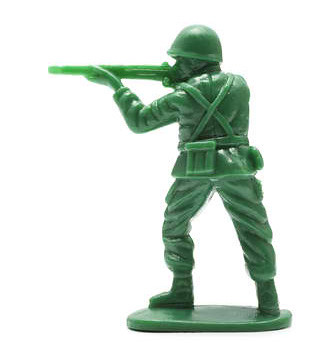 Price: At that time toy companies were creating their own line concepts, that were then supported by a comic book and / or animated TV series (as opposed to licensing an existing entertainment property).  We were given time to brainstorm new ideas and themes for toy lines—Air Raiders was inspired in part by the ‘little green army man’ play pattern that was more prevalent when I was a kid—you could get a lot more figures to creatively set up & stage elaborate battle scenes and scenarios, and with the smaller scale you could do a lot more with the vehicles and playsets.  The air-powered features were also a connecting theme and play feature, with various ways of launching missiles and smaller vehicles, and things like the floating orb for Man ‘O War.  The missiles were challenging to design, in balancing great performance with the safety considerations.

Airlandia: Could you breakdown what the process was from the assignment of a new toy design to what the final stage was?

Price: We would typically start by sketching a lot of concepts, refining as we go.  We kind of worked out between the designers who was going to design what, based on the needs for the various price points in the line and who wanted to design what.  Then we would create renders of our concepts, and usually a foam model to get the idea across, and then present the concepts to leadership over a series of review presentations.  Following input from these presentations (and if the idea was still alive), we would refine the idea, create a detailed list of all components included and how they fit together, and work very closely with engineering to make any refinements necessary for production and ensure that our cost targets were hit.  We would then create a very detailed / accurate model of the final toy, along with detailed drawings to scale, that were used to create the final production molds.

Airlandia: Did you get a lot of creative freedom when creating a vehicle/figure or was it tightly controlled to the last detail?

Price: We had a lot of creative freedom on the designs, since they were not based on something that already existed from a show or movie—we used to say that the Air Raiders (good guys) were Art Noveau-inspired, and the Tyrants of Wind (bad guys) were Art-Deco-inspired.

Airlandia: Did this design and presentation process have a high success rate? Or did you throw out a lot?

Price: We would generate a lot of ideas at first, mainly in concept sketch form and maybe a quick concept model, then have internal review meetings within the design team to start to narrow them down.  Then we would have a series of presentations where we would basically ‘pitch’ the ideas to increasingly higher levels of marketing and upper management to arrive at the final lineup.  This is pretty typical of any design process, which is a kind of ‘funneling’ down of ideas—start very broad with ‘out-there’ ideas included, then start to narrow based on things like uniqueness, marketability, cost, etc.—and of course, coolness.

(Airlandia Note: This mirrors what Dave McDonald said about working on broad, “out-there” sketches for a potential third series before the whole line was shelved.)

Airlandia: Were you allowed to rework the failed ideas or did you have to start over from scratch?

Price: I guess it would depend on why an idea was not selected—sometimes we had a very cool idea that was just too expensive, so we would try to creatively take the cost out of it while maintaining the features, for example.  I remember us having a lot of freedom to pursue ideas we had heart for — it was a very good environment that encouraged and celebrated creativity and invention.

Airlandia: You mentioned sometimes ideas got shot down because they were too expensive. What caused the expense?

Price: Size & number of parts (relating to number of tools, or molds, required), definitely any electronics, number of figures included, amount of paint decoration on the figures, size of label sheet, size of box, etc.

Airlandia: I’ve found Air Raiders sketches that designers did in pencil, ink and even paint. Did you get to work in any other medium like painting, sculpting, etc.?

Price: Each designer had their own style of sketching & rendering—we would typically sketch in pencil or pen & ink, then render in marker, colored pencil—not too much painting, except for some of the figure design development.  We all built our own models, from early foam model to more finished models. We had a group of sculptors for the action figures.

Airlandia: What materials did you make the prototype models from? How long would it take you to put something together? 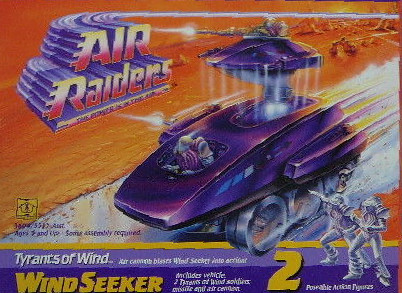 Airlandia: I read somewhere that you designed the Wind Seeker (one of my favorites), what other vehicles did you design for Air Raiders? Did you have a favorite?

Price: Yes, I did design the Wind Seeker.  The Man ‘O War was by far my favorite—it still amazes me how much we were able to build into that.  I really liked the feel of a “tall ship” in a futuristic world.

Airlandia: The stickers on the toys actually had a secret alphabet in little pictographs. Did you have a hand in making these?

Price: Yes, there was an alphabet we created—I had a small part in that—it was led by another designer in our group.

Airlandia: You mentioned how a lot of Hasbro’s concepts got animated TV series at the time. I’ve posted several blog threads some of the stuff I’ve come across like the scripts, an information “bible” and a cool illustrated promo folder so the idea for an Air Raiders cartoon had momentum. But nothing ever happened. Do you know why the Air Raiders animated show fizzled out?

Price: I don’t remember an animated show ever really getting off the ground—the emphasis was on the comic book.  I’m sure we would have loved to have it, but apparently the decision was made not to pursue it

Stay tuned for Part 2 as Dan talks about some cool concepts that didn’t reach the final stage.

4 thoughts on “An Interview With Product Designer Dan Price, Part One”