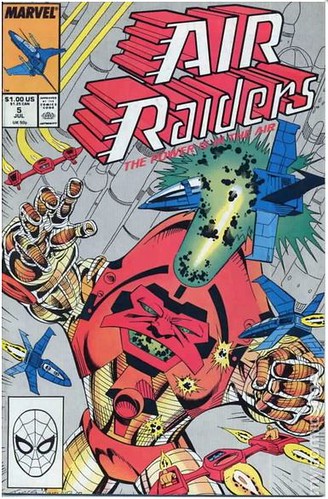 The last of the Air Raiders comics has arrived. I’d like to say they go out with style but this was by far the weakest issue of the lot. The plot was confusing and felt really rushed. I wonder if the writer, George Caragonne, ended up cramming a whole story arc into one comic once they knew the series was canceled. Which is a shame because it could’ve been so much better.

We start off with Aerozar, referred to as Imperator rather than Emperor, leading a convoy of “vital supplies” for the people of Airlandia. The supplies are enough seedlings to restore the planet’s damaged atmosphere. Aerozar hopes to lure the rebels into a trap while filming the whole event on Zephyr-Vision, the news broadcast he uses to keep the population misinformed and compliant.

Rokk and Jad (Thunderhammer commander) barely escape the trap and are pursued by Aerozar and a large force of Hawkwinds. Both sides are caught in a vortex of wind which sucks them down into a massive sinkhole.

They discover a mysterious city that appears to be abandoned. Rokk sends out teams to try and find a way to leave the city and get past the powerful winds. Duster and Con (Thunderclaw crewman) discover an ancient galvanic air well pump but release some sort of toxic gas that causes Con to go crazy and attack Duster. Rokk stuns him but gradually more rebels are affected, all of them taking on hostile attitudes and really dialing up their anger, jealousy and pride. This has a very Star Trek feel to the premise of the danger, not that that’s a bad thing though.

(Here’s where it loses me.) Eeleta is the first one to puzzle it out, remembering her years of tutoring. It turns out the ancients trapped all the evil of the world, concentrated it into the “Winds of Evil” and banished it/them to this forgotten city.

The Air Raiders find some premium galvanic air to win past the strange winds but first, they must help Aerozar and his men escape as well. They discover the Tyrants all fighting amongst themselves. Aerozar is being goaded by the ghostly winds to free them and from there, they will overcome the world. Aerozar almost kills Rokk but Rokk uses the Imperator’s own pride and ambition to break the wind’s mind control.

The two foes strike an uneasy truce to escape the city and seal the area off from the rest of the world with explosives. As the tunnel collapses, Aerozar is about to break the truce and attack the rebels when he realizes he’s on Zephyr-Vision again and is forced to honor his word.

It was an interesting idea, but the idea of trapping evil into a form was so hokey that it lost me. I think I would have just preferred the ancients did experiments with galvanic air and made a lot of dangerous compounds that were leaking. And if Aerozar had released the air in a fit of delusion, the world population would have gone full “28 Days Later” on one another. I guess that might not work so well with kids though…

This was a cool page below as it shows an immense bridge called the Sea Way that crosses the Sea of Fog. It also shows how their Zephyr-Vision works with it’s drone cameras and odd tornado/hologram viewscreen. I also like seeing how manipulative Aerozar is and that he actually comes up with a decent plan beyond the typical “Destroy the good guys!” 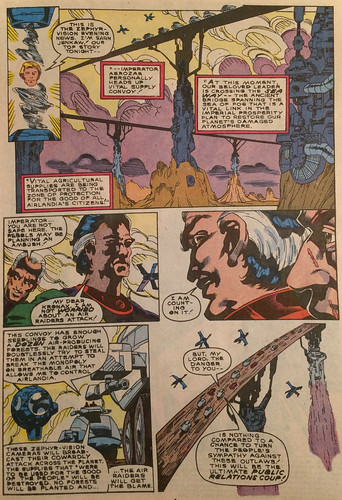 The battle starts with Storm Daggers airlifting some Thunderclaws in from above! How was that a surprise attack? 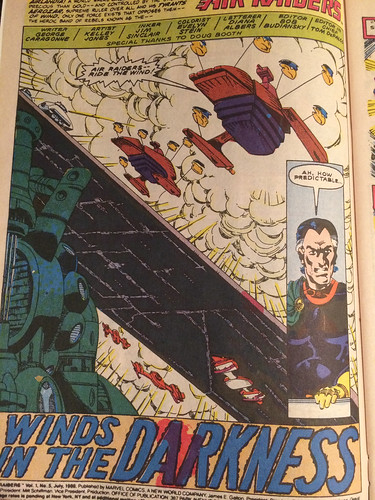 The rebels attack and that guy has a crazy big cannon! 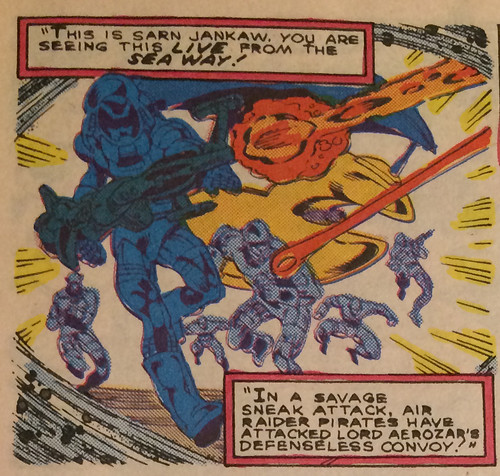 Aerozar shows off some nifty technology as he dons vampiric gauntlets that pierce armor and drain the energy. A really cool ability and one that makes the main villain a force to be reckoned with.

The Air Raiders have a brilliant way to escape; using a fog missile and then freezing it! Jones did a great job with those panels. 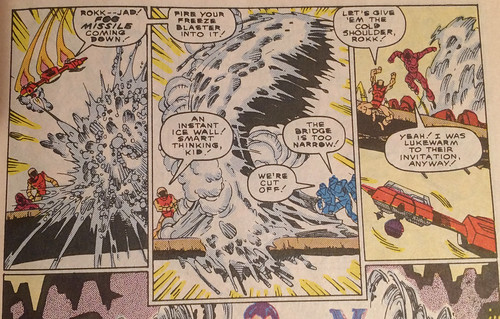 After the battle, Aerozar takes to the airwaves to appear “heroic.” You get another shot of a giant Zephyr-Vision device here.

Aerozar is pursuing the rebels in a Hawkwind although the pilot does not have the typical helmet design. I wonder why that was changed. Granted, the Hawkwind pilots have been used as soldiers in the comics so it makes sense that it would look different. 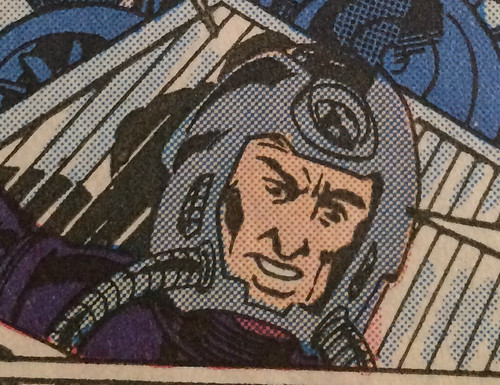 Both sides are caught in the vortex. 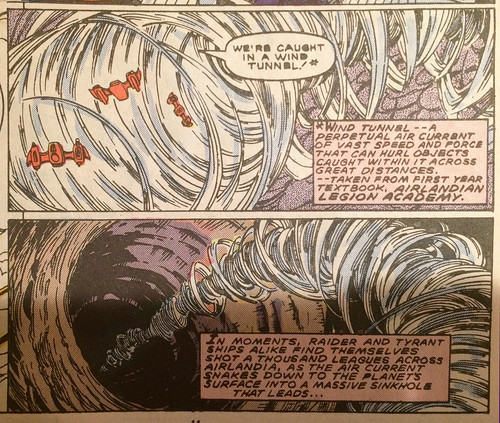 And they come upon the lost city (or jail?) 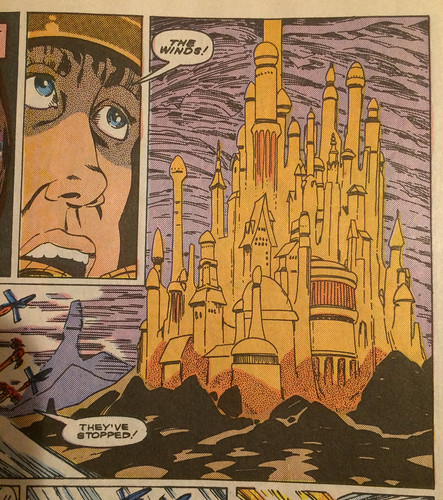 The city is guarded by a massive robot guardian that could’ve been designed by Jack Kirby himself! It looks normal on the cover but then the interior art makes it seem much more bizarre. The armor looks like it was pulled from Asgard and the head/torso combo reminds me of Arnim Zola. 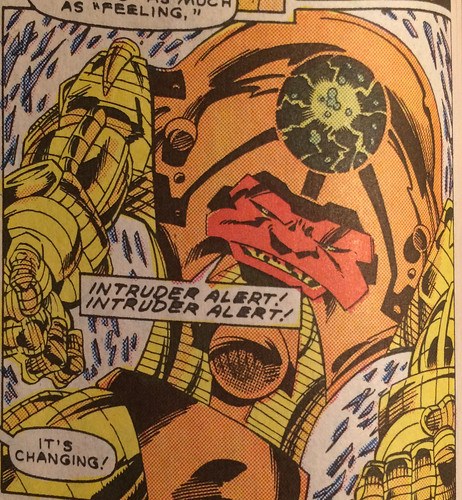 The Winds of Evil take control of Con. 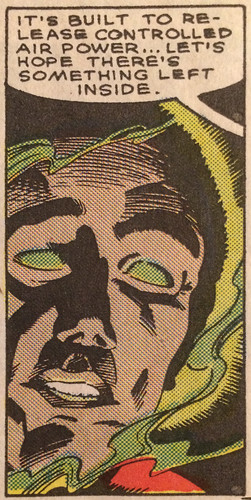 And here they pursue Saira who is overcome with childhood fears. 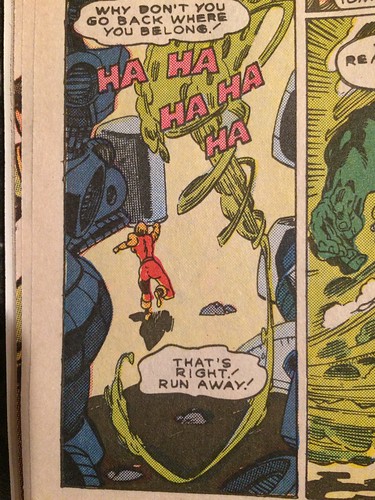 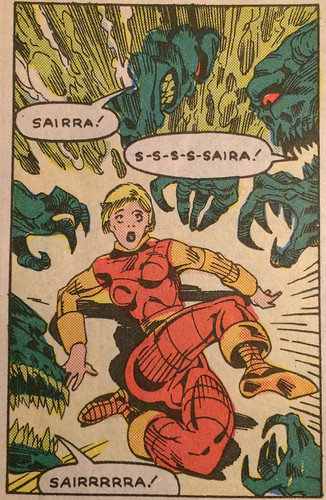 And finally Aerozar is about to kill Rokk. I really like how Rokk appealed to Aerozar’s pride and ambition which made him regain control of himself. It reminded me of Dr. Doom and all his schemes but also his strong force of will.

Well, that’s it! Sadly the comics were canceled after issue 5. I often wonder what other plans they had if the toys and comics had been a success. One other note of interest; after looking through all 5 issues, I realized that there was never a single Air Raider toy advertisement placed in them. What the heck? Why would you not try and raise awareness for any kids buying these books that there were toys to get too? It seems really short-sighted but then who knows, maybe the toyline was already dying by then and they decided not to waste any more on it.

See other comic-related links below.

5 thoughts on “Air Raiders #5: Winds in the Darkness”