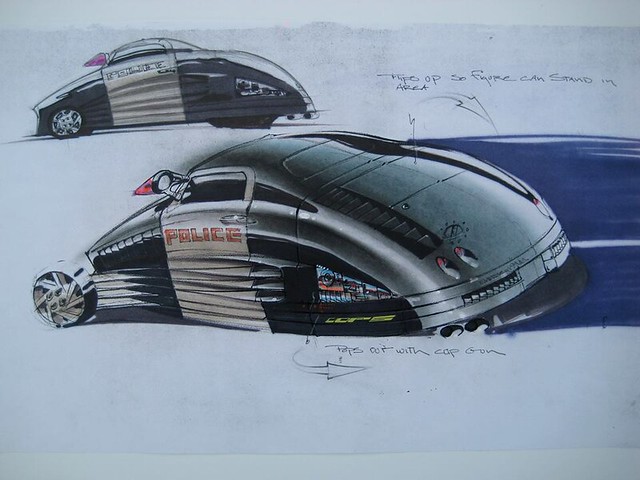 David McDonald went to the ArtCenter College of design to study car design. Eventually he ended up as a Senior Industrial Designer working in the Hasbro Boys Department back in the ’80s. His projects included the Inhumanoids, Dinosaucers, COPS, Crash Test Dummies and many others. He started working on Air Raiders after the first year of toys had already been designed. 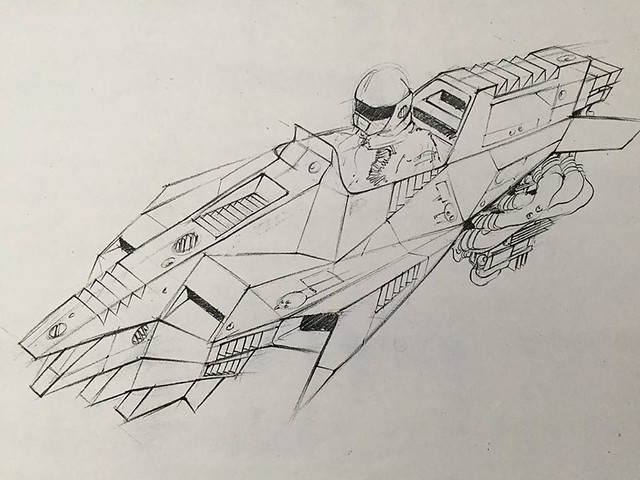 Airlandia: Were these the first concept sketches done for the toyline?

David McDonald: The designs that I did were for the 2nd and 3rd year, usually I’d jump into a new project and just mess around, throw a bunch of stuff out there and see what people think. If some of it is liked, I’d get into it further. All of the Air Raiders stuff I have was just searching for directions. 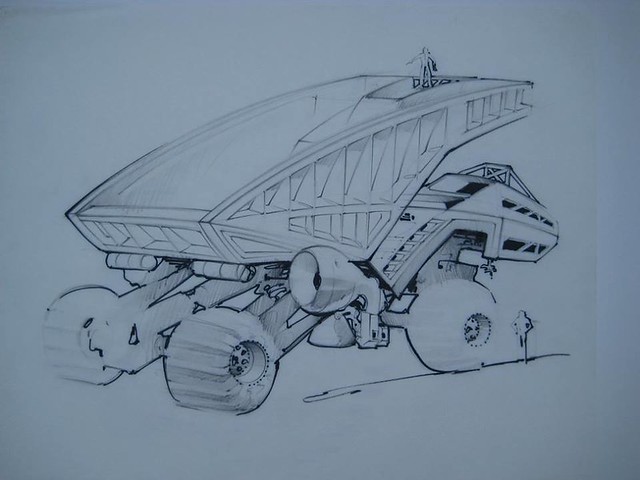 Airlandia: They look so different from the final product; were these preliminary sketches to get a feel for what people wanted or were they vehicles that were planned but never made?

David McDonald: By the time I worked on the project the first year was already done. I was working on the line Inhumanoids at the time this project started. The Air Raiders figures and vehicles were based on a look that everyone liked that I had done for a figure in the Inhumanoid line called Blackthorn (below) – if you check out his robot suit, you can see the starting point for the Air Raiders look. 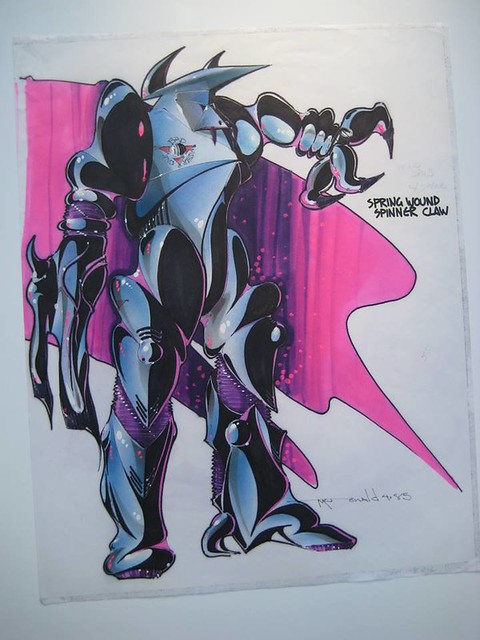 The big playset “The Air Refinery was the only item that I had worked on that was going to be produced. Ron Rudat [who designed all the famous ARAH GI Joe figures] and I worked on this together – we had to get it designed in a week so a model could be made for Toy Fair and the catalog shoot. 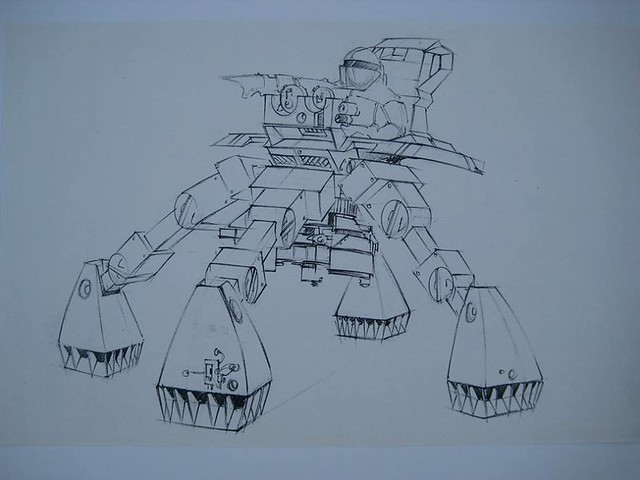 Airlandia: When you were assigned this project, did they say “go crazy and do whatever” or was it very tightly controlled?

David McDonald: The only tightly controlled item that I worked on was the Air Refinery – we wanted to keep the styling similar to the current line look. We were free to decide what the playset was. Usually when designing at Hasbro, we were just given price points to hit, there weren’t a lot of restrictions on the direction we (designers) wanted to go in. You can see this (hands off approach) with the Inhumanoids line, I was free to take it into some bizarre directions without much resistance.

I think Ron and I came up with the idea of a hidden Air Refinery – one side of it looked like a mountain, the refinery was hidden behind it – I don’t remember the price, but this was going to be the big purchase item for the line. 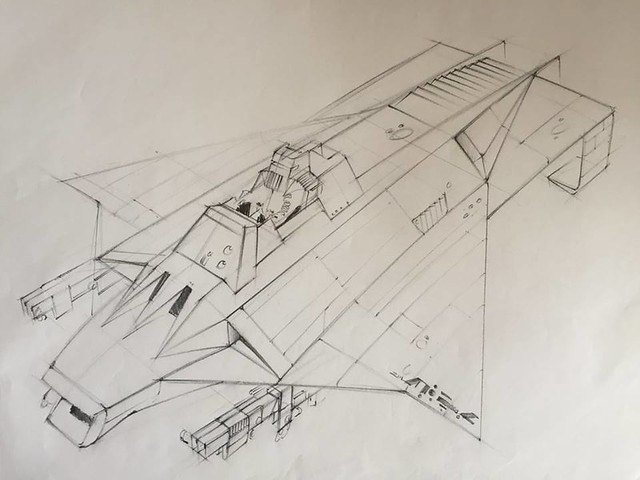 Airlandia: What happened with the Air Refinery? It appeared in the catalog; heck, it was even on the list for kids to check off what they owned of the toyline but nothing ever appeared. Was it ever actually made beyond the initial prototype?

David McDonald: I don’t think the Air Refinery was made, I think just the one prototype was produced (I don’t have one) – in the mid-eighty’s period Hasbro was trying to create their own Action Figure lines, I worked on a bunch of them, they either just lasted a year or died before they came to market. Toy companies today don’t do much of that type of high risk stuff now – most action figure line on the market are based on licenses from movies. 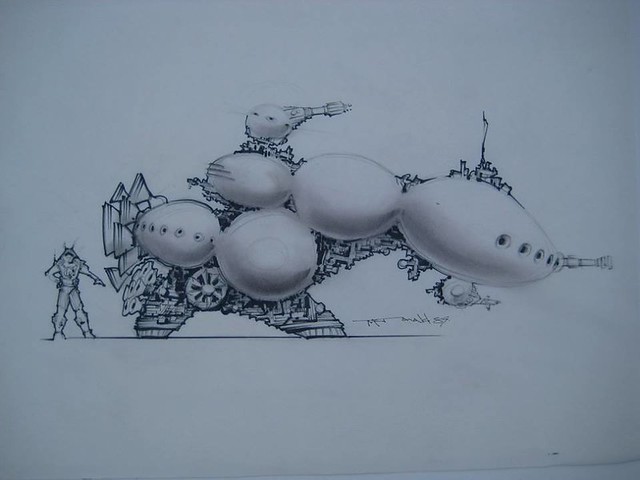 Airlandia: Some vehicles look like classic sci-fi designs but some have these bulbous, balloon look to them? Why? Was it a good guy/bad guy separation?

David McDonald: Yes, it would have been a good guy/bad guy styling direction – the bubbly designs were the good guys – the two vehicle sketches that I did had round air storage containers made into them. 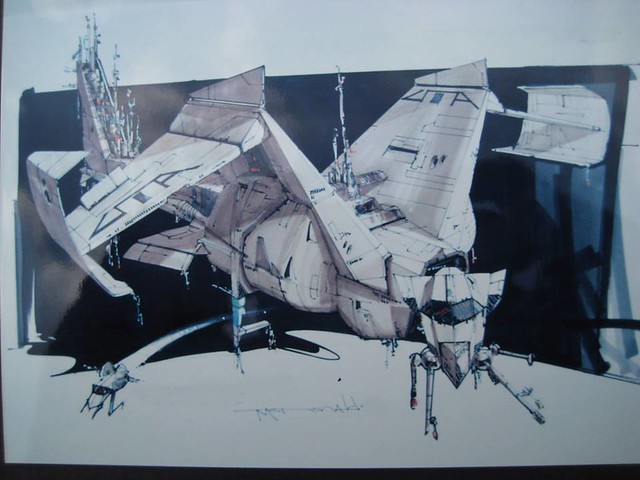 Airlandia: Are there any details you can tell me about that bomber aircraft with the huge wingspan? 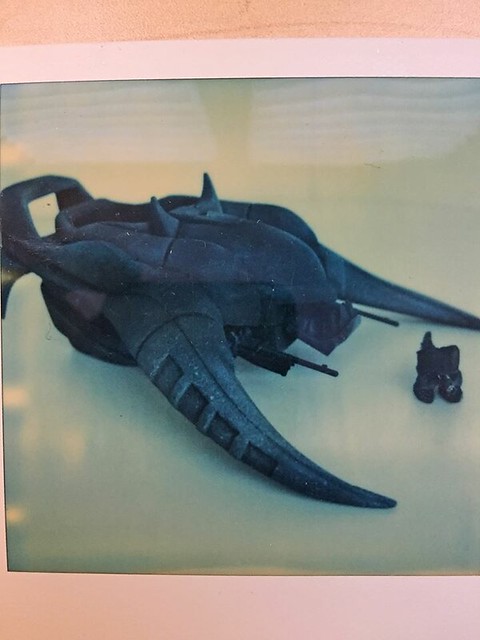 Airlandia: I hope you remember something about the picture of the roughed out foam model. What was it?

David McDonald: I can’t remember much about this aircraft (the black foam one). I made the foam model, I think it would have been a bad guys ship. 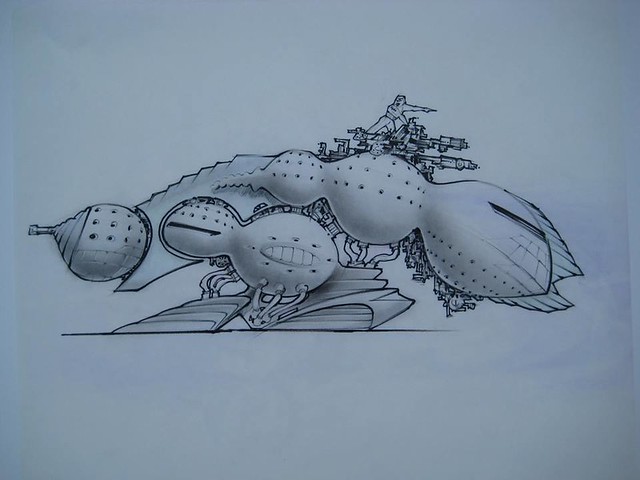 Airlandia: What happened to these prototypes like the Air Refinery or the mysterious winged foam model?

David McDonald: It’s strange but most of that stuff ends up in the trash – I’m sure that that black foam model I did ended up there. Sometimes the designers can catch things before they get thrown out, I have a few Inhumanoid items also when I was at Mattel a lot of times the designers were able to get prototypes samples before they hit the trash. Samples are often sent to China and never seen again. 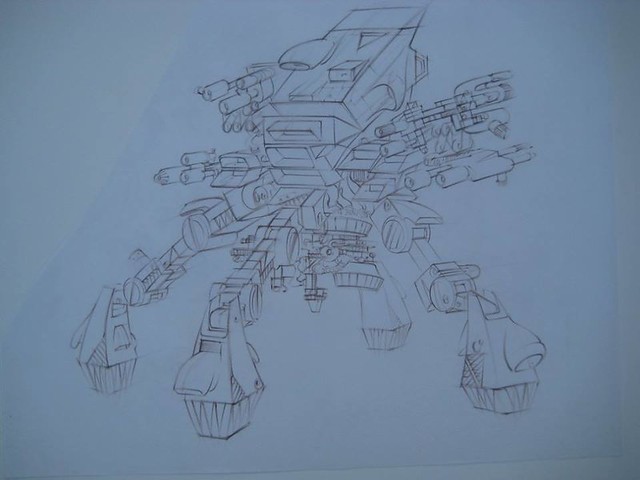 A big thank you to Dave for answering all my questions. He was awesome with his responses. I loved seeing his concept art, especially the cool mystery foam model. I wish he still had a sketch or even a name for what it was!

8 thoughts on “An Interview With Former Hasbro Designer David McDonald”