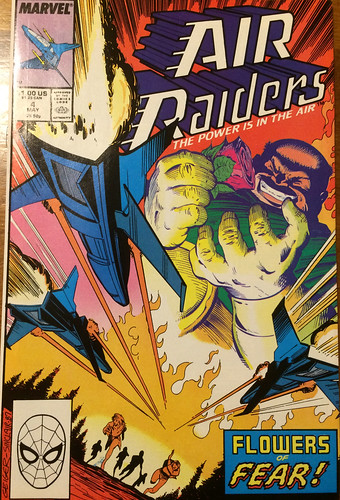 Summary: The comic opens to an Air Lancer (Enforcer) attack on a rural village of air farmers. Apparently they were growing an illegal forest that they harvested their air from. Baron Ee-lon arrives to indulge in his passion for collecting rare plants and flowers, in this case the Red Zephyr Orchid. He sentences some of the villagers to be shipped to the dreaded Fissures of Tyrrex. One of the farmers, Klar, escapes and is rescued by the Air Raiders.
Meanwhile Ee-lon goes back to his fortress only to run into Kala, Aerozar’s daughter. She has been sent to essentially spy on him as he’s late on his air tributes and is seen as incompetent.The Air Raiders learn from Klar about Ee-lon’s obsession with plants and concoct a scheme to lure the Baron out into the distant forests so they can capture and ransom him. They use some Hurricane Orchids from their own forests to get his attention and end up successfully netting Ee-lon and Kala, who went along because she was suspicious. Aerozar panics and agrees to the ransom payment of 10 air tankers of breathable air. The Tyrants try to ambush them as the exchange is made but they are defeated and escape with their air. Ee-lon is punished for his ineptitude as the Emperor, on Kala’s advice, drains all his precious greenhouses of the air to make up the loss.

The attack on the village and it’s precious forests. You’d think Air-FArmers would dress more like spacemen but these guys look like medieval peasants. Note the lack of any air-breathing apparatus; an effect of the nearby forest? 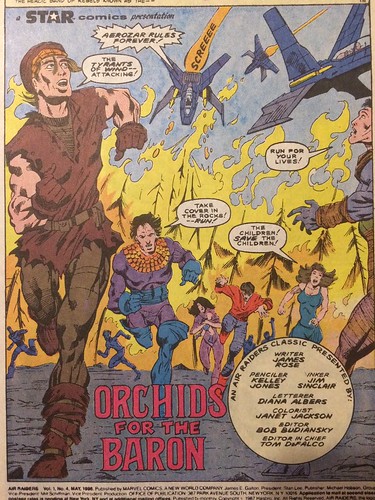 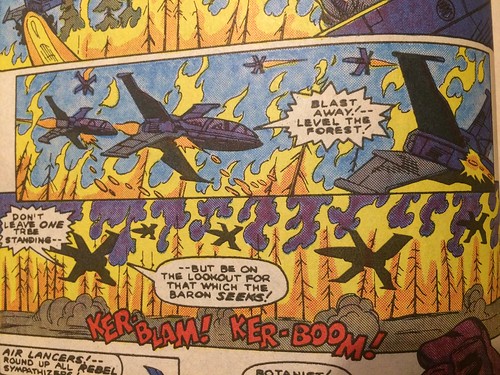 Baron Ee-lon arrives in all his glorious bling. Kronax apparently survived his fall in the last comic during the Airfest battle. 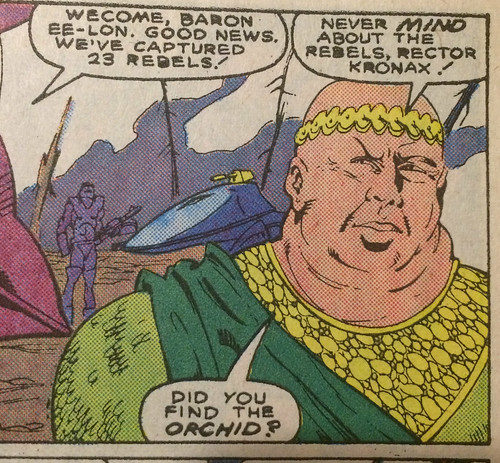 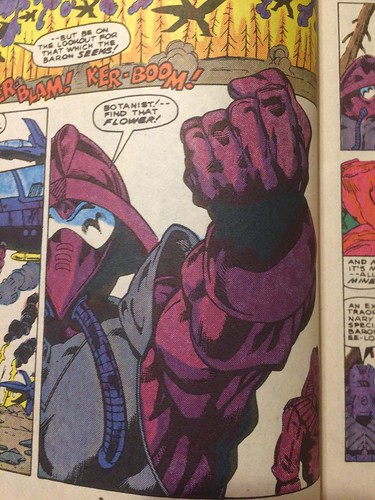 Check out this guy! That’s the coolest looking botanist I’ve seen! Maybe this is the generic Tyrant scientist suit?

The Tyrants apparently ran out of galvanic air which meant no fuel for the weapons resulting in a strategic retreat. 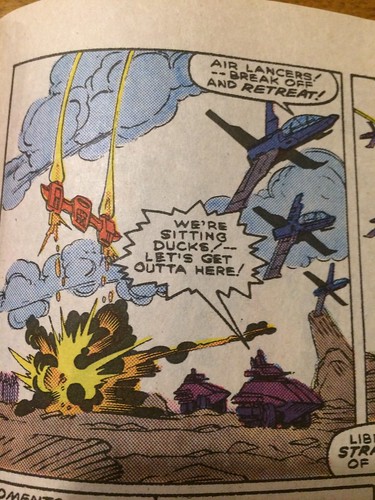 Meanwhile, back at the Castle of the South Wind, the baron shows his Air Refinery to Kala…

… and introduces his Noble Legion! These guys were mentioned in the cartoon notes by Ron Friedman. I thought they were more of an elite warrior but they seem more like scientists and refinery caretakers than soldiers. 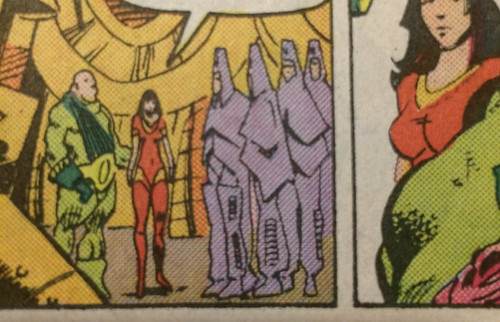 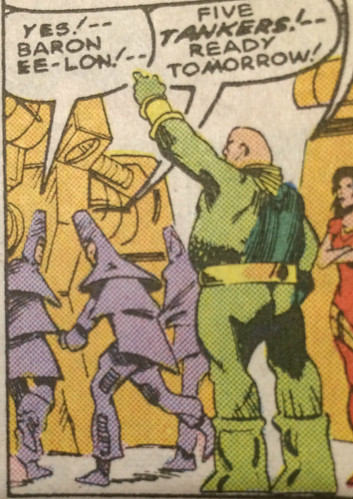 Now that the forest is destroyed, the air-breathing gear makes an appearance with the peasants and Rokk and his crew. 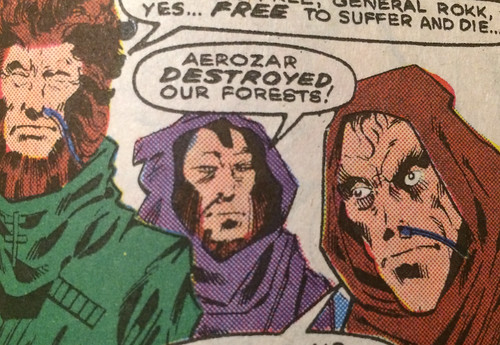 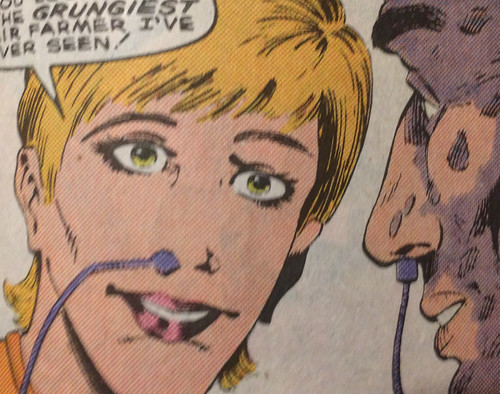 Rokk tricks Ee-lon to take him out to the forests in his personal Wind Razor. 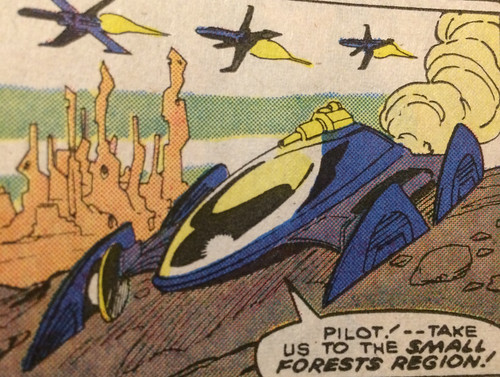 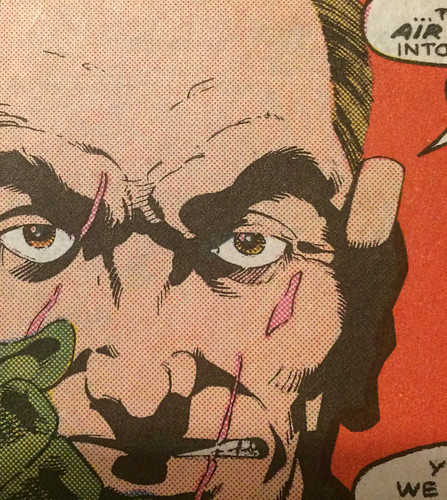 The Tyrants bring the ransom air in similar tankers from issue #2 although these don’t seem to have their own propulsion.

Finally, the issue had a letters sections which was called… 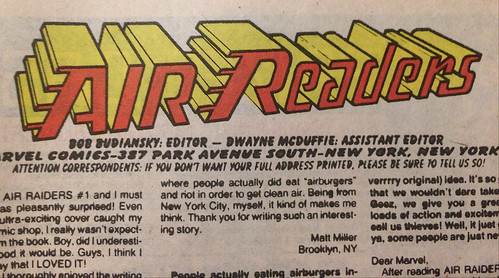 I liked this issue, it expanded upon one of the Wind Lords, continues to show how devious and nasty Kala can be and further touches on how Aerozar grinds the populace under his heel and why the Air Raiders exist. Ee-lon’s obsession with the flowers is a nice touch and separates him from some of the warrior personalities like Sunder and Kronax. The rebels continue to win in combat too easily while the Tyrants make Cobra look good (in combat effectiveness). Still fun!

See other comic-related links below.

5 thoughts on “Air Raiders #4 “Orchids for the Baron””