Strange, mysterious creatures roam the surface of the planet Airlandia. Many of the different species are unclassified and others are too lethal for words to describe. Because the great planetary upheaval left much of the planet uninhabited, little is known to this day.

I found this insert to be very interesting. First off, I just appreciate the fact that someone went to the trouble of thinking up various animals that might exist on a scarred planet like Airlandia. But it also gives some intriguing info about what happened before and after the comet.

There’s reference above to the planetary upheaval leaving much of the planet uninhabited which implies the passage of the comet that destroyed the atmosphere wiped out a large percentage of the population. Second, many of the creatures are unclassified, the people having no scientific knowledge of them. This suggests two ideas. The first is less plausible, because the comet seems to have happened just within the last decade or so, and that’s the idea that people have just forgotten what these animals were like over the years. If several generations passed, a lion or panda might become a mythical creature to someone on the opposite side of the world. But how could that happen in the short span of time that the emperor has reigned?

The other idea is that some combo of the comet, the atmosphere, radiation, the crazy winds and airs, etc. have mutated various creatures into beneficial pets and hideous monsters. This would explain why a high-tech society has no idea what’s going on with all this chaos out there.

But there’s also the problem again that I’ve noticed from the comics. Some Air Raider info acts as though the planet has no breathable air at all because of the lost atmosphere and the various toxic gases hence why everyone is in spacesuits all the time. But unless these creatures don’t breathe oxygen or can filter toxins, there’s no explanation for how some of them survive to this day. And what do they eat if plants and bugs are rare or extinct? Do they live off air or galvanic air somehow?

The animals themselves are a mix of cool ideas or downright weirdness. The Floater, a dog that can sniff out galvanic air while inhaling air which allows it to puff up and fly as well as the Puffer Compass, a strange little mollusc that always points north (why?) fall into the latter category. 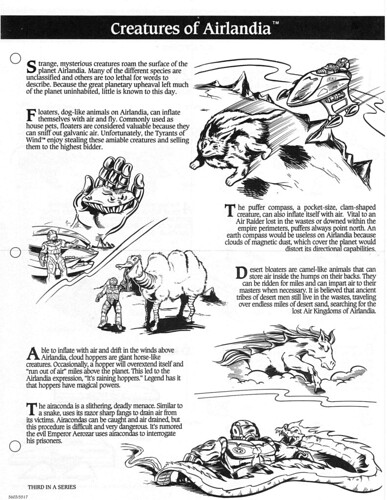 The Desert Bloater is an interesting animal with a cool concept. They store air in the humps and allow their riders to go into the wastes. This is a neat idea I might steal for my Dino Riders. Their bio also mentions tribes of desert men searching for the lost Air Kingdoms. Wait, what? What lost Air Kingdoms? I thought the only kingdoms were part of the Tyrant Empire. A great story idea that maybe some Shangri-La exists out there in the endless deserts and mountain crags. Maybe they would ally themselves with one of the two warring sides or maybe they would end up as a third faction.

The Cloud Hopper, a giant flying horse-like creature, reminds me of the mythical Ki-Rin and the Pegasus and I wish I had more sculpting abilities because I would have had the Air Raiders mounted on them versus the Tyrant dinosaur. I didn’t want to just take any old horse model and use it though.

Last is the Airaconda, the only hazardous monster of the bunch. He somehow drains air from it’s victims. Whether that’s through the bloodstream or a puncturing of the lungs, it’s not explained but it’s a different way of thinking and makes this vampiric serpent sound pretty nasty. Aerozar supposedly uses them to interrogate his prisoners. I’m not sure how, some sort of waterboarding technique?