Gi Joe and Cobra. Autobots and Decepticons. Thundercats and Mumm-Ra. These are all successful franchises and they all have really cool symbols representing the sides of good and evil. This is something lacking with the Air Raiders, which is odd considering the work they put into making their own rune alphabet (that’s another post) and some of the cool sticker designs they did. I’ve been working on a project and I wanted some sort of flag to go with the sides but there really isn’t anything to go by which is a shame. So I decided to cook up something myself.

Now there’s an older post here that shows some design sketches with various symbols that they may have been intended for something like this, so I fired up my Illustrator program and ran with it. 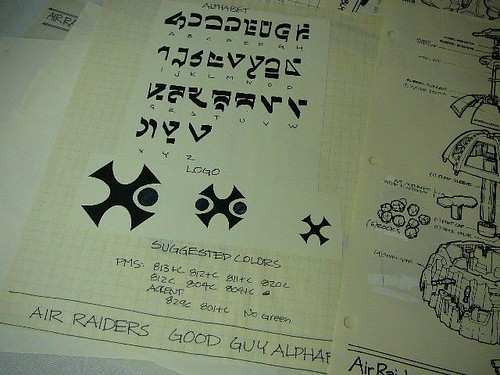 The above art was a little simple for my tastes but I did give it a try to make something visually interesting. Eh, not so much. (I noticed mine is a lot “fatter” than the sketch so maybe that’s why I don’t like it.) It also looks like He-Man’s chest symbol a bit too much for me.

Next were two other sketches which had some variations of the door sticker on the Command Outpost doors. 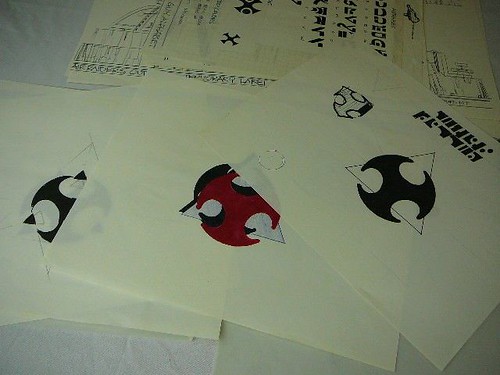 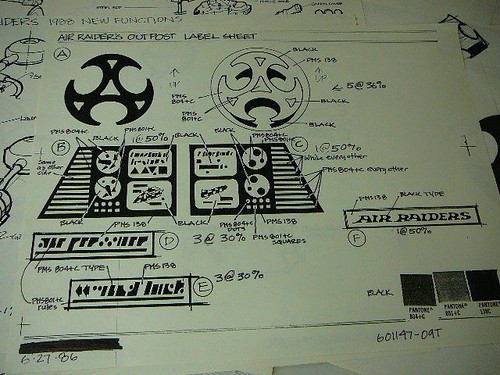 I like this design, it has a Star Wars-like look to it. I tried to copy some of the idea they used and did some of my own as well. I kept the colors to the warmer color palette the rebels use. The result is pretty cool. I’m not sure which I like best but I may run with one of them.

Next is the Tyrants. Sadly I don’t have any sketches to go off of so I looked through their stickers and settled on one from the Dragonwind. Again, I went off the cooler color palette and just did some variations of the designs that they used. Ultimately I think I like the original look so I”l probably use that.

Well, that was fun. It’d be cool to make some devices for the barons too. They each have colors assigned to them according to the box inserts. I’d like to explore that a little more, maybe create some local creatures like solar scorpions, sky sharks, stormhawks, etc. that would act as their heraldry symbols.

Last note: I’m looking into using one of the WordPress widgets to make these accessible as pdfs for downloads in case folks want to use them for themselves. I’ll let you know when I figure it out.