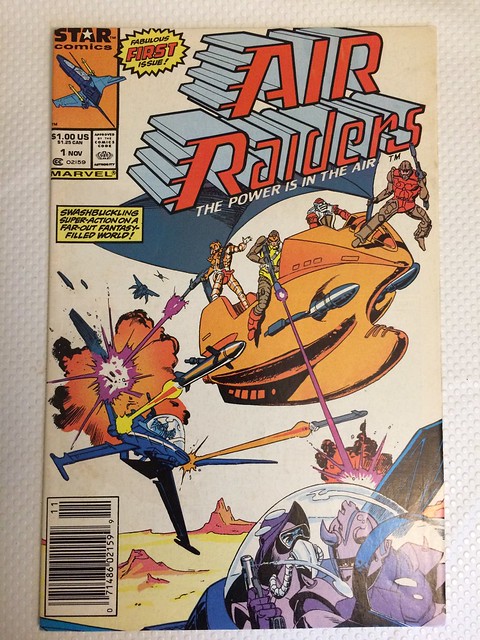 This is the first installment of my reviews for the 5 issues that were created. I’m going to be upfront at the beginning, I love these comics. Written by Howard Mackie and drawn by Kelley Jones, these books have that old-fashioned feel to them, reminding me of the comics I grew up reading in the 80’s. Good guys said cheesy lines like “Blast it” and “One good punch deserves another” and bad guys nefariously twisted their mustache while explaining their plans in detail. That was before the 90’s and later when comics became much more adult-oriented with lots of death, torture, sex and other hard truths of reality that started with Alan Moore and Frank Miller and snowballed from there. I like those comics, but I have a soft spot for the simpler ones of my childhood.  Many people don’t give these comics any love for that same reason.

So to start, I’ll give a brief synopsis. The first book is establishing some of the crucial elements of the franchise like the rebel Air Raiders, the evil Imperial forces and how the lack of air is affecting society and the world. The book opens with the village of Sachbar being oppressed by a new wave of air taxation by Baron Sunder’s. Rokk and his fellows take this chance to steal the collected air so that they can share it back to the population, very much like Robin Hood. There are several battles and a small twist (see the issue title) that I didn’t know about that rounds up the end of the book.

The rest of this blog is my thoughts and observations on stuff we learn about Airlandia but also mistakes and inconsistencies I noticed.

• There a number of first appearances; (Starting top left, going clockwise) General Rokk, Lt. Noble, Admiral Fury, Eeleta; daughter of former Emperor Archion, Tyrol; a local rebel leader, Hook; the Storm Dagger pilot, possibly Field Commander Jad of the Thunderhammer, and Branch; the Outpost watchman. There are several characters that were never in the toylines, which makes me wonder if Eeleta, Branch, Tyrol and even Archion were ideas for future toys that never made it. 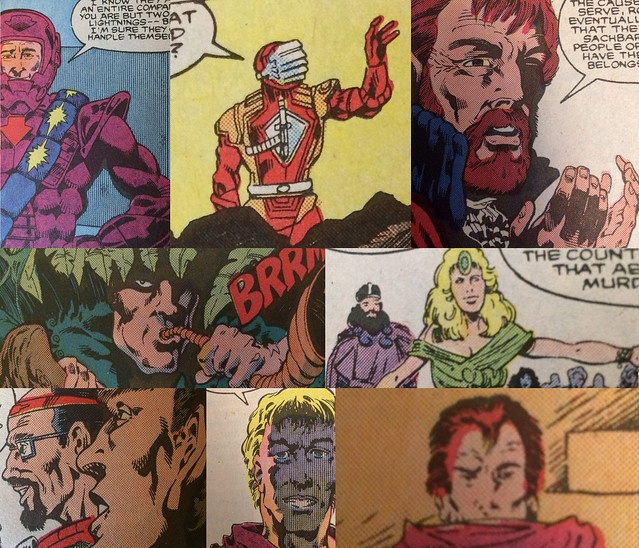 • On the Tyrant side are several familiar faces(left to right). The first is General (or Commodore) Kronax. This is the first inconsistency between the toyline info and the comics. With the toys, Kronax is a commodore and flies the Hawkwind. In the comics, he is a general, flies the Dragonwind and looks like the conquistador-style commander of the Dragonwind rather than the purple alien helmet Hawkwind pilot. Next is Sgt. Blot of the Wind Seeker, a brutish fellow who plays one of the bigger bag guy roles in the comics. Last is the Hawkwind pilot, judging by the look of his helmet (this should be Kronax). Oddly, there are a bunch of those pilots and they act like common foot soldiers under Blot’s command.

Oh yeah, Kronax has an arm weapon like Baron Jolt!

• Blot and his forces are called Air Lancers, an older terms from the early notes for the toyline. There is no mention of the Enforcers title. I like to think Air Lancers was the original name for the Airlandia armed forces before Aerozar took over and took on the more appropriate name of Enforcers.

• One thing that confuses me is the state of Airlandia’s atmosphere. There is mention of an airdome over the village which would explain how harsh the planet surface must be. And early in the book, people are running around the streets with no protective gear on, thank to this dome. But in a later scene the villagers are wearing masks for some reason but no suits, just peasant garb. Plus the rebels flee into the petrified forest where there’s all sorts of greenery but no mention of an airdome or not.

• We get a look at the first non-toy vehicle, a galvanic air barge or cargo lighter. It looks like two large connected tubes with wings. It’s a neat ship, kinda looks like a Star Wars design. I will probably try and custom make this; seems like it would be easy with some paper towel tubes and a few other materials.

• I’ve mentioned in several posts here and here how the Air Raider vehicles are armed with freeze breeze weaponry. Here’s a visual example of what it does. It’s odd that the guns are affected but not the armor. And this is another example of the Hawkwind pilot acting as a pack of foot soldiers. 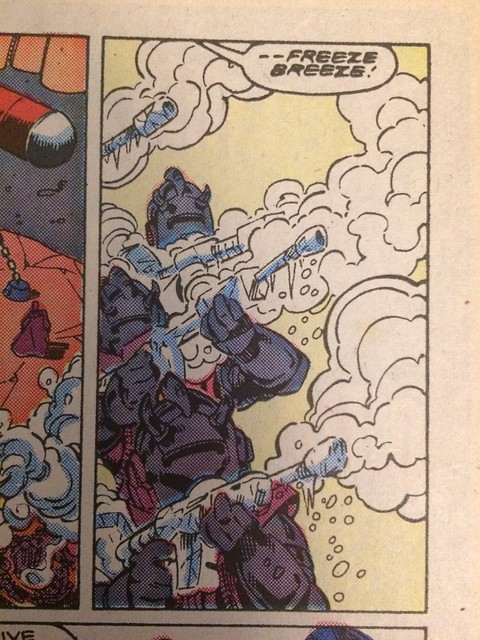 • The above shows the bad guys using some sort of combat rifle. Below is a few more examples of the characters wielding pistols or rifles. Since the figures never came with guns, I’ve always wondered what they would have looked like. Overall, they’re pretty mundane; I think I would base any pistol or rifle design I did off of the weapons mounted on the vehicles and Command Outpost.

• We get a look at the barons without their armor! We see Baron Eel-on later on in the comics but sadly this is the only appearance of Jolt and Modrex. I’d like to see a more interesting redesign for all of them. 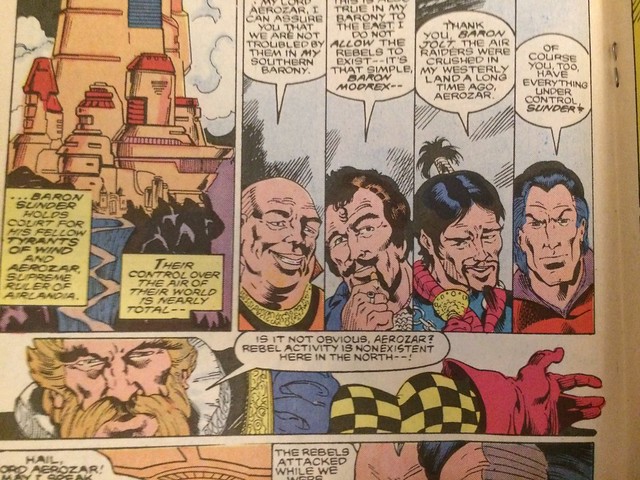 • Baron Sunder looks particularly ridiculous in his checkered shirt, red gauntlets and ruffled neck collar. But I love the look of his battle armor, he looks very cool in that. Spoiler alert: it turns out that Sunder is Rokk’s father. I wonder if Star Wars played a part in this creative decision. I wish they had spent a few issues building up to this, it would have made the reveal a little more important. 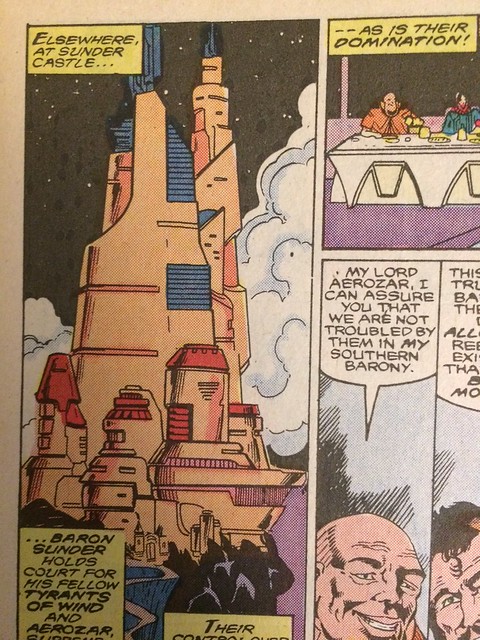 •Last silly note: A high tech world with no trees didn’t stop Rokk from finding a common wooden wagon to smash into the Tyrants! 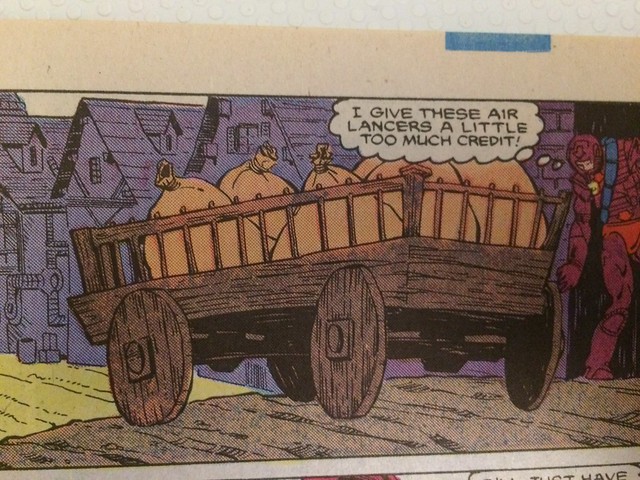 Overall, the comic is fun but it seems like Marvel did not have up-to-date information for some of the material.