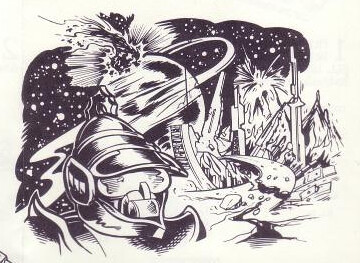 Some thoughts on the history of the Airlandia; it was once a peaceful empire that spanned the globe until a passing comet threw the world and it’s people into chaos. The passage of the comet caused the planet to lose most of it’s atmosphere and to be thrown off it’s axis.

The resulting environmental disasters were immediately capitalized on by an ambitious and powerful general in the Airlandia armies. I wonder if the comet may have actually been part of the initial stages of Aerozar’s coup, somehow manipulated into gravitational pull of the Airlandia solar system? It seems likely as a random, planet-wide catastrophe doesn’t seem like the best time for the overthrow of a peaceful government run by Emperor Archion.

In addition to Emperor Archion, the old guard consisted of the The Lords of the Winds, part of an ancient lineage of royal monarchs.  I assume these were old bloodlines from kingdoms that were conquered into the empire long ago. Previously known for their benevolence and kindness, these affluent kings have been corrupted by the iron will of the evil Emperor Aerozar.  Chosen as representatives for the people of Airlandia, they’ve become oppressive rulers, intent on possessing great wealth and power. This 180 degree turn suggests that the Emperor used something on the Lords, perhaps the Zombie Winds or Winds of Illusion (see Winds of Airlandia information insert), both strange jet streams that cause confusion and an impairment of senses. In the comics, Lord Sunder was the father of General Rokk and they had a tragic fallout. I wonder if the storyline could have eventually resolved itself with them rescuing Sunder from these gases or at least him returning to his former benevolent ways somehow.

(If Aerozar was a general of Airlandia, I wonder where Admiral Fury or General Rokk were in the ranks of the Air Guard. They must have rallied some of their soldiers as they have a good foundation of soldiers, pilots, mechanics, etc.)

All in all, the fall of the empire shows an advanced foresight and good strategy on Aerozar’s part. He manipulated the hierarchy in place (army and aristocracy), responded quickly through technology (environmentally stable war machines and the use of Air Refineries) and keeps his power through further manipulation and tyranny (air rations and spy network).

One thought on “The Rise of Aerozar”